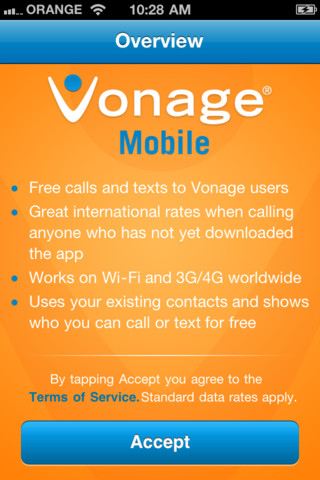 Vonage has come out fighting in its ongoing battle with the king of VoIP, Skype. The company has just released a new iOS app along with a low calling rate that is sure to put the frighteners on Skype.

Available to download for free right now, the Vonage app allows VoIP calls between Vonage users across iOS and Android as well as cheap calls to traditional landlines, too.

Users of the app can add credit to their Vonage account right on their iOS device, be that iPad, iPod touch or iPhone, using the wonders of the in-app purchase system. Apple will no doubt be taking its 30% cut of that, too.

“In addition, when calling those who don’t have the app, you get ultra low-cost international calling with per-minute rates that are on average 70% less than major mobile carriers and 30% less than Skype **. Add calling credit directly from your iTunes account.”

The free app currently also offers free calls to landlines in the United States, Canada and Puerto Rico from anywhere in the world. This is apparently a limited time deal though, so if you’re going to call your Auntie Mavis over the border, then now is the time to do it!

This is just another example of carriers being squeezed out by internet-based alternatives to their core businesses. It’s adapt or die time folks.