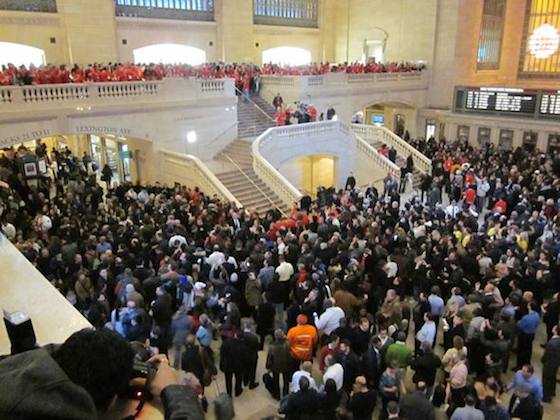 It’s been nearly three weeks since the New York Times published its now infamous report on the poor working conditions of overseas manufacturers, and Apple is still feeling the ripple effects. The iPhone-makers were named exclusively in the lengthy article regarding their poor efforts to correct the growing labor problems in China.

In response to the allegations, activists setup an online petition calling for Apple to release a “worker protection strategy.” And not only has the petition collected more than 250,000 electronic signatures, but the activists are about to take their protest to the next level…

BGR is reporting that representatives from both Change.org and SomeOfUs will join protesters tomorrow at 10am in front of Apple’s recently-built Grand Central terminal retail store to deliver the signed petition to the company.

Here’s the combined press release from the two organizations:

What: Local consumers will deliver more than 250,000 petition signatures to Apple, asking the company to develop a worker protection strategy in response to reported abuse in Chinese supplier factories.

Mark Shields, an Apple user from Washington, DC, launched his campaign on Change.org after learning about poor working conditions in the Chinese factories where many popular Apple products are manufactured, including the iPhone. His campaign has been featured in the Boston Globe, CNN International, Guardian, BBC, and other national publications.

More than 55,000 SumOfUs members have signed that organization’s petition already, making it the most viral petition since SumOfUs, a new global grassroots community of consumers fighting for corporate accountability, launched just over two months ago. More than 35,000 of the petition signers say they buy Apple products, including over 20,000 iPhone users.

“I use an iPhone myself,” said Taren Stinebrickner-Kauffman, executive director of SumOfUs. “I love it, but I don’t love having to support sweatshops, and neither do millions of other Apple consumers.The hip, educated market that Apple aspires to corner is largely composed of responsible consumers who don’t want to be complicit in sweatshop labor.”

“Apple’s attention to detail is famous, and the only way they could fail to be aware of dozens of worker deaths, of child labor, of exposure to neurotoxins is through willful ignorance,” she added. “That’s why our members are asking Apple to clean up its supply chains in time to make the iPhone 5 its first ethically produced product.”

The petition delivery is being coordinated globally by concerned consumers. Petition deliveries will take place in Washington, DC, New York, San Fransisco, London, Sydney, and Bangalore, all asking Apple to improve its commitment to worker protection.”

We’ve heard the expression, “the tallest trees catch the most wind,” but this is ridiculous. Not only is Apple one of just hundreds of manufacturers that outsource assembly jobs to China (so does Sony, Amazon, Microsoft, Nintendo), but it’s one of the few companies that seems to be making a conscious (or at least public) effort to change things.

Just last month Apple joined the FLA (Fair Labor Association) — the first and only technology company to do so. And it’s also recently published a list of over 90% of its suppliers in an effort to maintain supply chain transparency.

Tim Cook responded to the NYT article by addressing Apple employees in an internal email. It’ll be interesting to see what, if anything, he has to say about tomorrow’s events.

What do you think of the Apple Store protests?