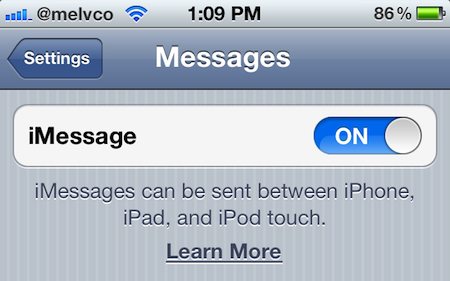 A few months after Apple released iOS 5 to the public last year, a major bug was found in the software’s new iMessage application. Several users reported that their iMessage accounts continued to remain active after wiping their devices.

Gizmodo added fuel to the fire yesterday when it published several images of strange iMessage conversations it was receiving on an iPhone after visiting an Apple Store for tech support. Apparently, when a Genius inserted his personal SIM card into the phone to test the device, the handset locked on to his iMessage account…

After months of silence regarding the so-called iMessage bug, Apple gave a statement to The Loop this morning claiming that what happened with Gizmodo’s iPhone isn’t the result of a bug. It was simply an employee error.

“This was an extremely rare situation that occurred when a retail employee did not follow the correct service procedure and used their personal SIM to help a customer who did not have a working SIM,” Apple representative Natalie Harrison told The Loop. “This resulted in a temporary situation that has since been resolved by the employee.”

So how do you keep this from happening to you? Well for starters, you might think twice before dropping your SIM card into another device. But if you must do it, make sure you toggle the device’s iMessage switch off and then on again once the original SIM card is re-inserted. The Loop says that doing this will unregister your iMessage account with the device.

You can find the switch by going into your device’s Settings app, and tapping on the Messages tab. Since Apple doesn’t see this as an actual “bug,” we may never see an official fix for this. So it might be a good idea to remember this tip.

Have you noticed your iMessage account staying active after wiping your device?