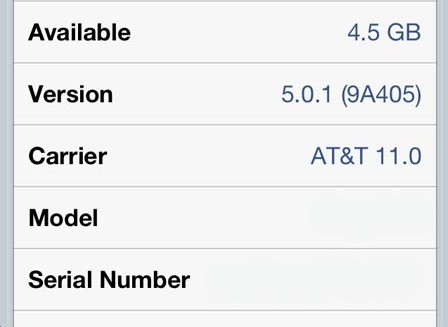 Have you ever wondered what the letters stand for in an iPhone’s serial number? Whether you answered yes or no, the truth is that the code actually contains some pretty interesting information about the handset.

The folks over at OSXDaily have just published a legend of sorts that breaks down what each set of letters in an iPhone’s serial number mean. You can tell what size the device’s hard drive is, and even when it was made…

UPDATE: iDB reader Sadal points us to this website which can tell you everything about any Apple product based on the Serial Number.

If you’re looking for your iPhone’s serial number, it can be found on its box’s ESN sticker or in iOS by going to Settings > General > About.

“Serial numbers come in the form AABCCDDDEEF which can be read as follows:

Keep in mind that this pattern of serial numbers only works for the GSM iPhone 4. The structures for serial numbers on other iPhone models like the 3GS and 4S are fairly similar, but the above legend isn’t 100% compatible with those devices.

While this tip won’t likely change your life, it’s cool to look and see when your handset was made. If your week number reads anywhere between one and four, it means your iPhone was apart of the initial production run. That’s kinda neat, right?