A new report form the boys and girls of Google has revealed a couple of interesting facts about mobile phone usage across five key markets.

Looking at the five countries that are leading the charge towards a connected life – United States, UK, Japan, France and Germany – the search and mobile giant has come to a couple of interesting conclusions.

Firstly, and perhaps not such a surprise, it appears that Smartphones are rapidly eating into the remaining feature phone share, with the proliferation of iPhones, Android phones and the like causing users to upgrade to more powerful handsets. 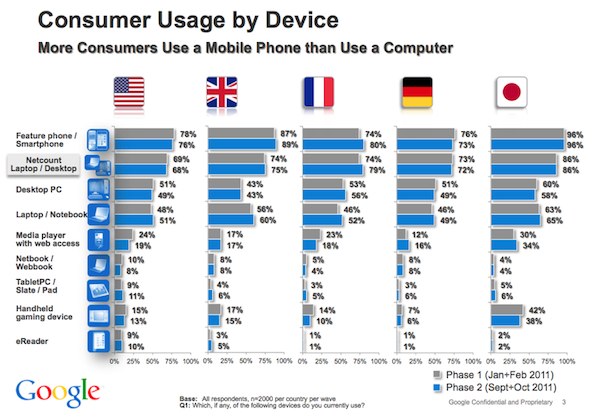 Take the UK for example. When Google took the nation’s temperature towards the end of the year, the results said that 89% of consumers owned a smartphone, while just 75% used either a laptop or desktop computer.

It’s a similar story in the United States, with 76% smartphone ownership and just 68% with online computers. The trend continued throughout all five of the markets looked at by Google, which suggests more than a one-off piece of data.

While these numbers were collated before the Christmas period, the huge sales of iPhones over the last quarter will no doubt have helped these figures along, and we don’t see anything changing soon. Tablet usage has also grown, with the iPad being the vast majority of that market, too.

As if the excellent quarterly sales numbers from yesterday were not good enough already, it appears Apple may be well placed to take advantage of the move towards mobile technology, too.