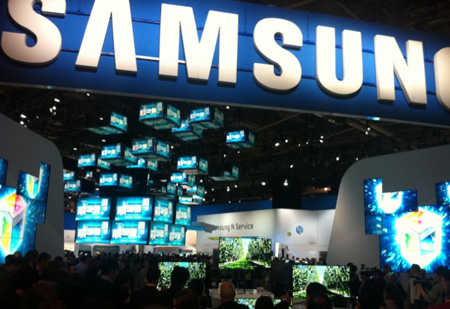 Just by looking around the showroom floor at this year’s CES, you can see that Apple’s rumored TV set has already made an impact on the industry. The electronics show is littered with voice-activated “smart” televisions, and the like.

But you wouldn’t know it by listening to Samsung’s Australian audio visual director Phillip Newton talk. The executive made some interesting comments recently in an interview with The Sydney Morning Herald regarding Apple’s TV set.

When the newspaper questioned Newton on what he thought about Apple’s rumored “connected” TV, he responded:

“It’s old news as far as the traditional players are concerned and we have broadened that with… things like voice control and touch control; the remote control for these TVs has a touch pad.”

It’s true. Samsung has been at the forefront of CES this week with its so-called “Smart” televisions. The TV sets aren’t just voice-activated, but they can also be controlled by physical gestures (a la Minority Report) and facial recognition. Cool.

But we still can’t help but think that Newton’s comments are reminiscent of those of ex Palm CEO Ed Colligan. The chairman of the then-largely successful smartphone company made similar comments back in late 2006 regarding the rumored iPhone.

Here’s one we dug up via Brighthand Smartphone News, dated November 21, 2006:

And we all know how that turned out. If Apple’s taught us anything in the past 10 years, it’s that you should never underestimate it. That doesn’t mean that every product the company puts out is a guaranteed hit, but you can’t dismiss them.

Given all of the hype, it’ll be interesting to see what, if anything, Apple has cooked up for the TV industry this year. Word is that there were over 250 Apple employees combing the floor at CES this week, all of whom just got a peek at the next 12 months of consumer TV technology.