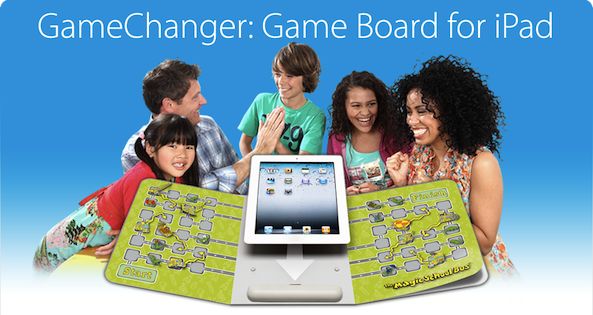 The iPad has more than a few accessories already, but we’ve not seen one quite like this and, to be honest, we don’t really know what to think about it.

Shown off at this year’s CES, the GameChanger by Identity Games gives gamers a way to turn a $500 iPad into a board game, which sounds both awesome and incredibly boring at the same time. The idea is simple: use the board as the main game board with the iPad providing digital interaction, either asking questions or providing other uses.

The iPad connects to the GameChanger using its dock connector, giving the game board a connection with allows it to feed information back to the tablet. This  allows the game app to tailor the experience according to where pieces are on the game board, for example…

Two games are currently available for the GameChanger via the App Store: The Magic School Bus and Animal Mania, with both sporting their own magnetic GameChanger skin which makes the board’s appearance fit with the game that has been chosen while keeping the 48 pressure-sensitive pads free of obstruction.

“Click your iPad into the GameChanger and now you have an interactive game board for a whole new way to play.  Choose your game app and place the game skins on the GameChanger. Put the playing pieces on the board, and the iPad interacts with the 48 pressure fields transforming the GameChanger into a living game board.”

The GameChanger is available now for $79.99.