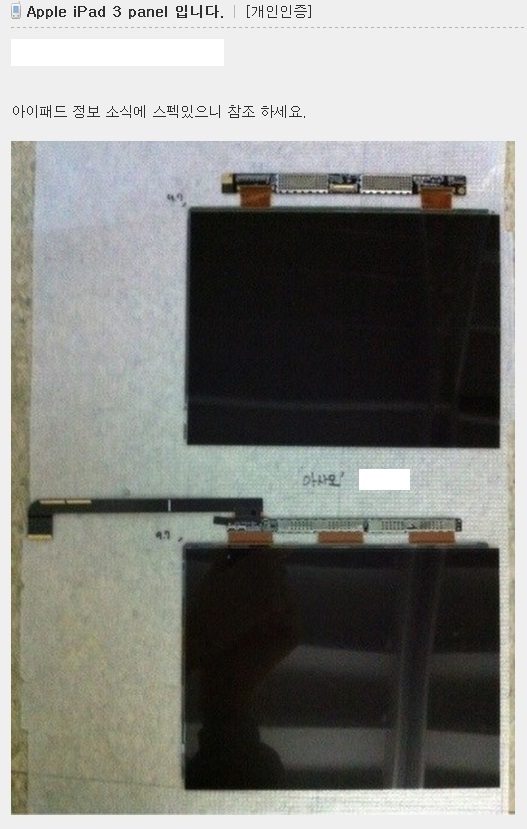 If there is one thing that is guaranteed every year, it’s that MacRumors will get its hands on some photos of what appear to be parts from a new iPhone or iPad. This year is proving to be no different, with the latest part to show up supposedly being an iPad 3 screen, complete with Retina display pixel density.

Unfortunately, the screen is not attached to anything, and thus not functioning, which is a shame.

While the screen was not powered up, that does not mean there isn’t at least one portion of the photo that should get the pulse racing – the screen pictured possess three, count ’em, three ribbon cables. Exciting…

All skepticism aside, the ribbon cables could prove to be telling. See, the iPad 2’s screen sports just the two cables, but the photographed iPad 3 screen has one more. Notice the difference between the supposed iPad 3 screen at the top, and the current iPad 2 part at the bottom.

Given the expected 2048×1536 resolution of the new tablet, an extra cable to help carry all that data is not beyond the realms of our imagination. In fact, the more we think about it, the more it makes sense.

We are still firmly encamped in rumor territory right now, and this photo will not be the last to surface before Apple’s next announcement. The possibility of a Retina display is the biggest change Apple could make to the next-generation iPad, along with adding improved cameras to bring it up to spec with the iPhone 4S.

Would a Retina display be enough to get you to upgrade to an iPad 3, or will you be looking for something a little more exciting from the boffins in Cupertino?