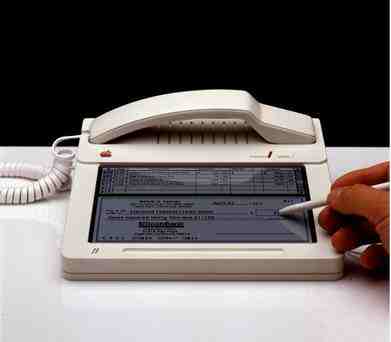 It’s fair to say that Apple’s iPhone has turned a few heads since its original release in 2007. The first iPhone was obviously a game changer, bringing glass-fronted, multitouch phones to the masses. The iPhone 4 was, and still is, one of the best-looking phones around.

Now check out the iPhone’s grandfather above. See the resemblance?

The aforementioned image shows an Apple telephone that was in the works all the way back in 1983. The story goes that Hartmut Esslinger was responsible for the design of the telephone, and he knew what he was doing — he also came up with the design for the Apple II…

“In 1982 he entered into an exclusive $1,000,000 per year contract with Apple Computer to create a design strategy which transformed Apple from a “Silicon Valley Start-Up” into a global brand. Setting up shop in California for the first time, Esslinger and Frogdesign created the “Snow White design language” which was applied to all Apple product lines from 1984 to 1990, commencing with the Apple IIc and including the Macintosh computer.”

While obviously very different to the iPhones we all carry around today, that 1983 effort shows that Apple was already beginning to think about what could be done if a telecommunications device also had a touch-based screen. Thankfully, that stylus didn’t find its way into the iPhone’s final design!

The photo itself seems to have originated from Jay Mug.