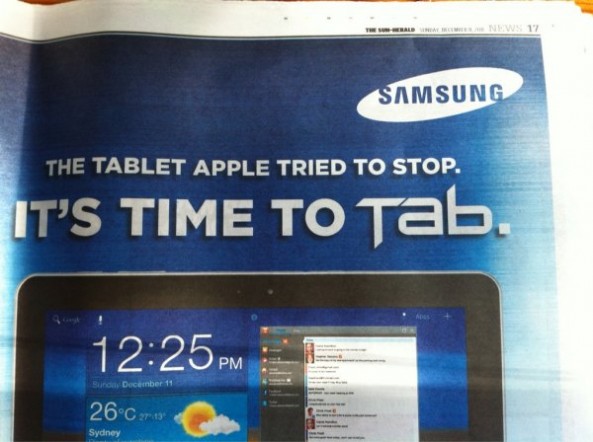 There’s still 10 days left until Christmas, but Samsung has already gotten its holiday wish. Earlier this month, an Australian judge overturned an injunction that has kept the company from selling its Galaxy Tab 10.1 in the country.

The ban has been in place since August of this year, and was a major win for Apple in its ongoing patent battle with the Korean manufacturer. The two companies have been in and out of courtrooms around the globe since April…

Apple obviously appealed the decision, but it was upheld last week by the Australian High Court. Samsung is now free to sell its popular tablet in the country, and it appears the company is looking to take advantage of its newfound publicity.

Martin Aungle, an Australian marketing communications professional, tweeted the above photo along with the caption, “How could Samsung resist using it?” The image is of a new ad that ran in the Sun-Herald newspaper this week.

You have to hand it to Samsung. It was pretty ingenius of the company to use the nearly 3 month long injunction to its benefit. But will clever advertising be enough to spur sales of the 6 month old tablet in Australia this holiday season?