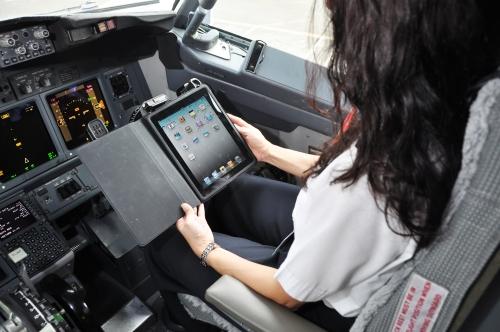 As of this friday, your favorite American Airlines pilot might be playing with a shiny iPad 2 while navigating through the air at 30,000 feet. That is because the airline is the first to receive the go-ahead from the FAA to use Apple’s tablet as a replacement for paper-based flight documents, beginning Friday 16th of December.

The move will help American Airlines lose weight thanks to the removal of massive books and other flight documents from each flight, and if you’ve ever been over your allowed luggage weight on a flight, you will be acutely aware that weight equals money when in the air.

There is no news yet on what software the iPads will be running or how locked-down they will be with regards to what apps they will be allowed to run.

Opinions on the move to replace paperwork in the cockpit with an iPad are split. While some agree that the savings in fuel are worthwhile, others take the stance that an iPad is more susceptible to breakage or malfunction while paper is not. Both arguments hold weight – if you will pardon the pun! – and we aren’t sure which side of the fence we sit on.