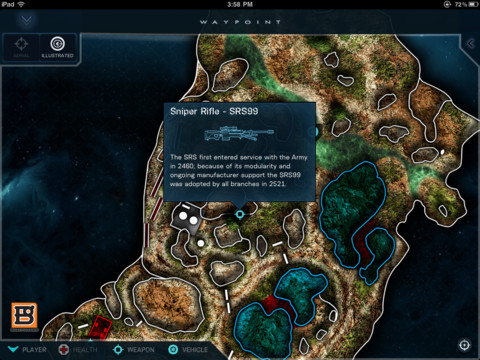 Someone at Microsoft just can’t stop pushing out new iOS apps and games, with yet another release coming from Redmond showing up in the App Store.

Just hours after Microsoft’s Kinectimals found its way onto iPhones, iPads, and iPod touches, another game-related app has landed, and this time it had help from Master Chief. Halo Waypoint ties right into all your Halo stats, letting players keep up to date with the competition as well as their own progress while away from their beloved Xbox 360.

Stats are not the only thing Halo Waypoint has going for it. Acting as a second screen for Halo, the app will let players see real-time positions of players during matches, as well as giving them the option to create customs games right from inside the app.

Microsoft’s big plan right now certainly seems to revolve around making mobile apps that tie into Xbox 360 games, with their Windows Phone 7 apps tending to get more functionality than their iOS counterparts. Even so, from the reports we have been receiving, Halo Waypoint is still a great addition to any Halo fan’s arsenal.

Halo Waypoint is free and available to download as a universal app now.

Are you a big Halo fan? Will you be using Halo Waypoint as a way of gaining the upper-hand in battle, or do you not need the help?