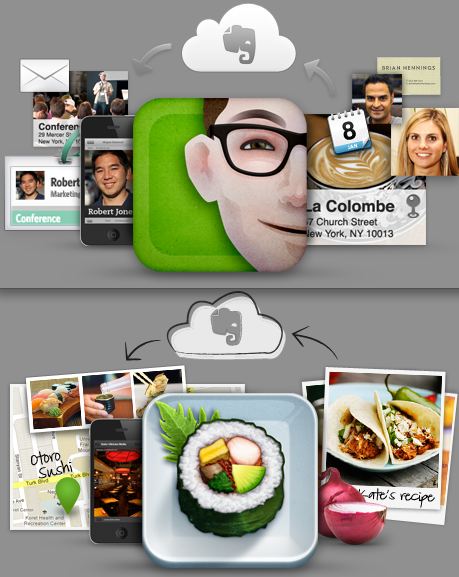 It’s been a busy day for the Evernote team with not just one, but two apps being pushed out into Apple’s App Store.

You probably know Evernote as the note-taking and archiving utility that helps to organize our digital lives, but did you also know that it can help you remember the people you meet, as well as the meals you’ve eaten?

Evernote’s two new apps, Evernote Hello and Evernote Food, do just that, and the best part is that they seamlessly sync with your existing Evernote account, meaning all your Hello and Food notes are available anywhere on any internet-enabled device…

Evernote Hello is there to help you remember the people you meet, say, at a convention or large gathering, like Macworld. The idea is that you hand your iPhone over to the person you are meeting and let them put their details into Evernote Hello. They would enter their name, contact details, and maybe a photo. An “Encounters” feature means that the app can also track where any meetings took place, as well as keeping track of notes and photos taken at the time.

Evernote Food is more than a place for you to keep photographs of your meals. The app, just like the other Evernote apps, allows the taking of notes and photos, as well as the addition of tags and other meta data.

Both apps have been born out of things that people have been using the old Evernote app for since its initial release. Whether we really need separate apps, we’re not sure, but if you have a specific need for either Evernote Hello or Evernote Food, then we’re sure you’ll like them both.