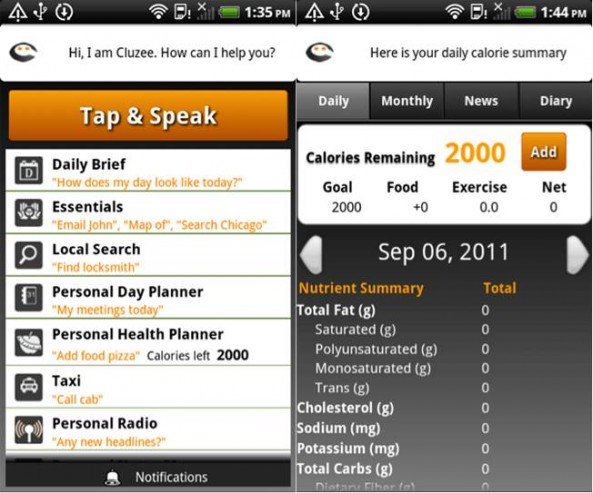 Android has its own Siri, at least that is what the creators of Cluzee would like you to believe. The new app is even called your “intelligent personal assistant,” and Cluzee tries to mimic many features that Siri users will recognize, including the ability to dictate text in emails and set up appointments using natural, everyday language.

Cluzee is a third party service for Android, meaning that it isn’t backed by Google. The service looks to work exactly like Siri, but the voice commands that Cluzee recognizes are much more limited than Apple’s technology.

Cluzee can also search deals in line with the user’s buying habits, read emails and text messages aloud, research hotels and flights, find restaurants a user might enjoy based on his or her tastes, convert voice to text to send emails or SMS, and more. ”People are drowning in information overload,” Tronton CEO Ashish Patwa said in a statement. “We don’t need all of the information available, all of the time. We just need the right information at the right time, which Cluzee intelligently provides, making us more productive. Technology created the problem, but we’re using smarter technology to solve it.”

Cluzee becomes available on Tuesday for Android phones, and Tronton has plans to launch a cloud-based version in the future that will be accessible from any phone, tablet, computer or internet-connected device. We’ve spent the past day testing the app and it has worked quite well for us so far. The scope of available commands is far more narrow that Siri’s, but there is plenty of functionality in this first public build of the app and we have high hopes for future versions.

One of the most obvious differences between Cluzee and Siri is the fact that Cluzee acts as a standalone app, while Siri is integrated into iOS. If your smartphone is going to service as an “intelligent personal assistant,” then you better be able to access it no matter where you are in the OS.

Android has its own Voice Actions technology by Google, but you may as well be using a Windows Phone if you expect a Siri-like experience there. With Cluzee, the conversational concept of a voice assistant seems to be addressed, but Cluzee still recognizes a very limited amount of voice commands and contextual situations.

Cluzee definitely seems more promising than any other voice assistant service we’ve seen on Android, but it still has a long way to go. No need to watch your back, Siri.

Update: AndroidCentral has a great video of Cluzee in action: