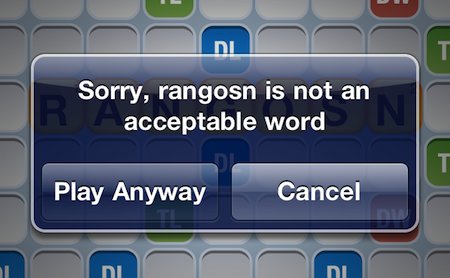 Words With Friends has undoubtedly become one of the most popular cross-platform mobile games over the last few years. The Scrabble-like title allows users to pair up with both friends and strangers to see who has the biggest vocabulary.

The game follows all of the typical word-game guidelines. Each player gets 7 lettered-tiles, and garners points for using them to make words on a playing board. Typically, only real “dictionary” words are playable. That is, unless you have this tweak…

MessWithWords is a jailbreak tweak by developer Brian Fox that allows you to play illegal words in the Words With Friends game. It’s a simple utility that doesn’t require any initial setup or contain a settings page. Once installed, it’s activated.

And that’s where the fun comes in. After downloading MessWithWords, pop into WWF and start a new game (or play an old one). When you go to play an incorrect word, you’ll see: “Sorry, ____ is not an acceptable word.” Just tap the Play Anyway button. 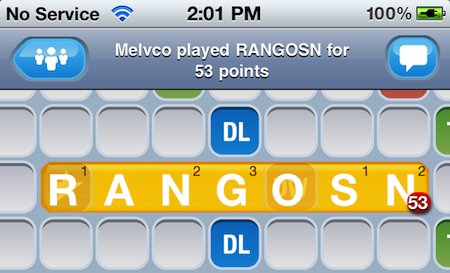 The utility has worked seamlessly for us in testing. The only evidence that you have it installed are the ridiculous words sitting on the board. The tweak can also detect when an opponent is using a similar hack, so it’s a good way to avoid getting hustled.

All of this awesomeness (and believe us, it’s pretty awesome) doesn’t come cheap, though. Fox is asking $4.99. But if you’re tired of losing in Words With Friends, this will certainly give you a “competitive advantage.” MessWithWords is now available in Cydia.

What do you think of the tweak?