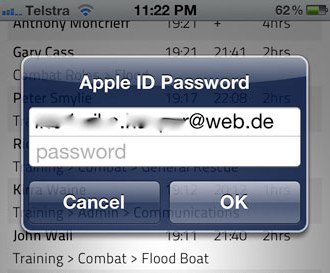 One of iOS 5’s marquee features is the ability to backup and restore devices from iCloud without the need for iTunes or any of those pesky wires. Let’s be frank, we’ve all got hundreds of those little white USB cables, but can we find one when we need it? We know we never can!

As is so often the case with such new and ambitious services as iCloud, it appears that the process is not without its problems, more specifically, problems surrounding a possible security risk.

According to Electronista, there appears to be a real issue that could potentially reveal the Apple IDs of random users…

The whole issue arises when a user restores an iDevice and then uses iCloud to restore a backup. As Electronista’s video shows, the software repeatedly asks for an Apple ID password while automatically populating the email address of an account. The issue here is that the account does not always have any link to the iDevice itself, as five or six email addresses are often revealed before the sequence ends.

According to reports on Apple’s discussion forums, the recent iOS 5.0.1 release does not fix the bug, though Apple is reportedly aware of the problem. Perhaps this will be another fix to find its way into the upcoming iOS 5.0.2 release.

As is so often the case with early versions of a new release of iOS, there has clearly been a few bugs that have found their way through the various betas. Here’s hoping we get the next update before too many email addresses get revealed!