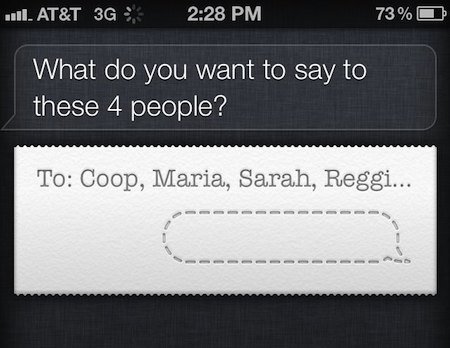 Now that folks have had over a month to play with the new iPhone 4S, more and more Siri tips are starting to surface. Siri can do so many things that new commands are constantly being discovered.

Earlier today we told you how to use Siri to see planes flying above you using Wolfram Alpha’s database. Now we’ve come across a tip that lets you use the assistant to send group text messages and emails…

Even though the trick seems rather obvious, we figured we’d pass it along to the folks who may not have known about it. Sending a group message or email using Siri is as easy as saying everyone’s name you want to receive the correspondence.

For example: “Send a message to Mom and Lindsey and Katie and Scott.”

The key to the trick is using the word “and” between contacts. If you don’t say it, Siri will run all of the contact’s names together and obviously not find them. You’ll know it has worked when Siri asks “What would you like to say to these 4 people?”