For those that really take todo systems seriously, the OmniFocus app is often at the top of the list for getting things done. With a suite of apps that covers the Mac, iPad and iPhone, OmniFocus creators The Omni Group have created a real powerhouse of applications that many swear by.

In the latest update for the iPhone version of their OmniFocus app, the developers at The OmniGroup have taken Apple’s lack of a Siri API and gone all Chuck Norris on it. Instead of waiting for Apple to give them permission to use Siri to create tasks, they have linked OmniFocus with iCloud, which in turn gives the app full access to reminders created using iOS 5’s built-in Reminders app.

The end result? You can now tell Siri to create reminders in OmniFocus…

Setting the thing up doesn’t really need a degree in computer science. Update to the latest release and then fire up OmniFocus for iPhone, visit settings, and then you will see a new “iCloud Reminders” option under “Capture.” Here, enter your iCloud login credentials. 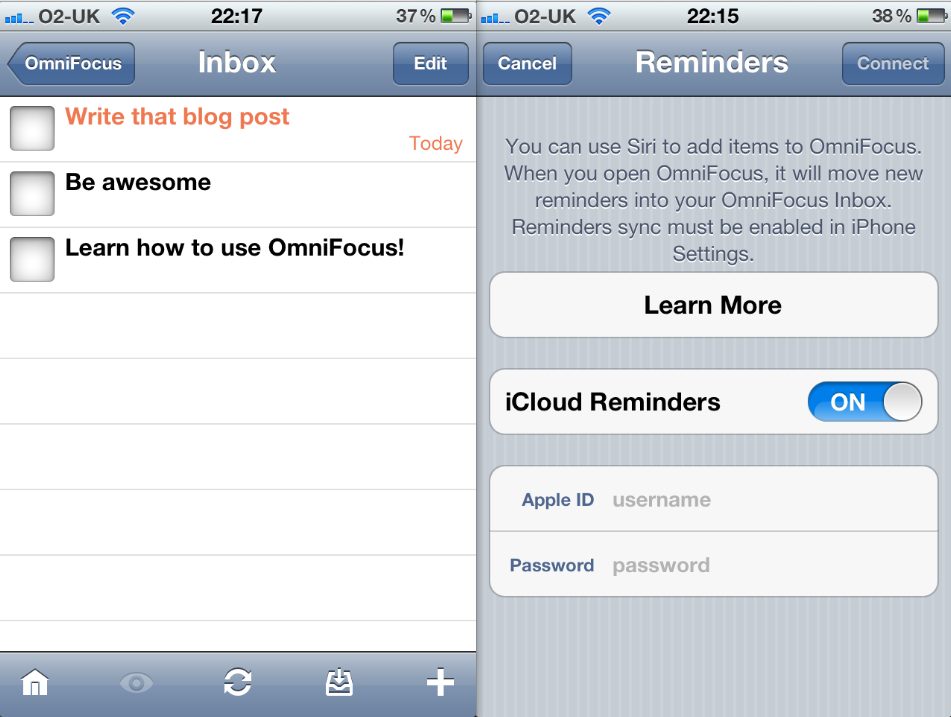 Once you’ve followed those steps, you’re all set. Now, when you create a new reminder using Siri, just fire up OmniFocus and watch the new action be pulled right into your Inbox when the app syncs. The action is then deleted from your Reminders list, too, so no duplicates.

Those wanting to use OmniFocus and Reminders simultaneously can do so by creating a new list in the Reminders app and calling it “OmniFocus.” This is the list that OmniFocus will sync with, so it’s up to you whether you set that as the default list that Siri will use. To change it, go to your iPhone’s Settings app and then Mail > Contacts > Calendars. Then, scroll to the bottom and change the “Default List” option.

When creating a new task using Siri, you can also tell it which list to use. For example: “Add to my OmniFocus list” will prompt Siri to do ask you what new task you would like to add to that specific list. This is perfect if you want to use multiple lists in order to keep OmniFocus and Reminders tasks separate. 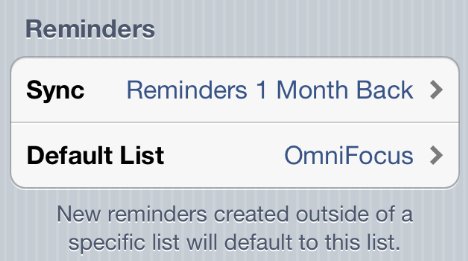 There is one caveat that is worth noting: you do need to launch OmniFocus to give it chance to pull your new tasks from iCloud. As of right now, the app cannot ping iCloud in the background, so it will not update your tasks on its own. Well worth remembering!