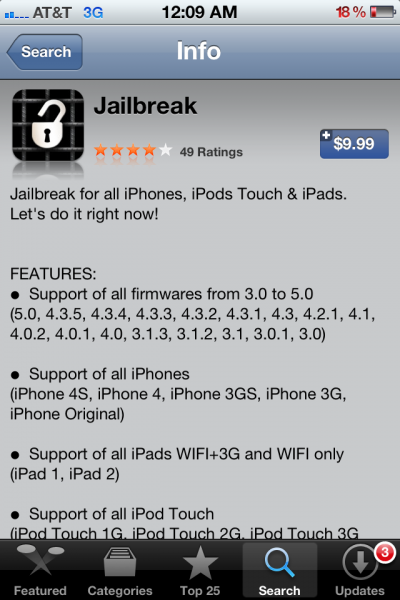 A few days ago a $9.99 jailbreak app surfaced in the App Store. The app was clearly a fake, and we quickly told you that the app had nothing to do with jailbreaking anything — it was a crappy, 2D scrolling game.

Apple has now pulled the app from the App Store, so people will be unable to get duped by the app’s false description. The real question is this: How did Apple let an app called “Jailbreak” in the App Store in the first place?

As pointed out by MuscleNerd, if you visit the App Store link for the fake app you’ll get the message that “the item you requested is currently unavailable.” It’s honestly surprising that the app lasted as long as it did (about 4 days) in the App Store with such a name.

Apple has always had a firm stance against jailbreaking because it sees jailbreak exploits as security problems (which they are), and it doesn’t want its ‘walled garden’ ecosystem to become contaminated with unapproved code.

This fake app claimed to jailbreak all kinds of iOS firmwares, which makes no sense if you know anything at all about how jailbreaking normally works. Not only that, but the $9.99 price tag should have been a huge indicator that it was a huge scam. (We’ve already told you to never, ever pay for a jailbreak.)

The fact that such an app made it past Apple’s review team is a mystery.