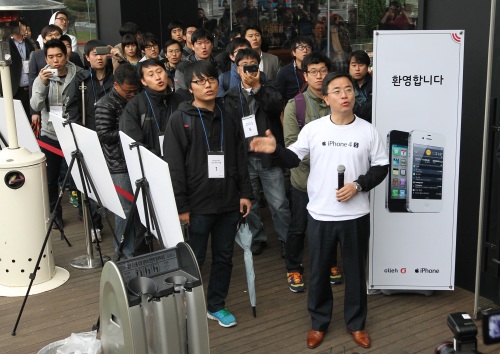 People in fifteen new countries can now walk into a store and pick up an iPhone 4S, as long as they can find one, that is!

Hong Kong and South Korea are the headline-makers amongst the group of new countries getting their sticky little fingers on Apple’s latest and greatest, along with Albania, Armenia, Bulgaria, El Salvador, Greece, Guatemala, Malta, Montenegro, New Zealand, Panama, Poland, Portugal, and Romania.

That list, in addition with the countries already selling the iPhone 4S, makes this the fastest Apple product rollout yet…

The release day was met with huge queues, particularly in Hong Kong, where the country’s new flagship Apple store found itself mobbed by 3,000 potential customers. MacRumors reports that there were so many people that the Apple Store staff had to limit the number that were allowed to queue to 1,250. Given that the iPhone 4S was supposedly a “let down” following rumors of a completely revamped iPhone 5, plenty of people still seem to want one!

It’s not all been good news for Apple with its new iPhone, though. The release of iOS 5 alongside the new iPhone has seen numerous problems, with a mysterious battery-drain issue causing Apple to release a software update already. Unfortunately, that doesn’t appear to have made things any better for those suffering.

Did the iPhone 4S recently debut in your country? What’s the public’s reception of the handset been like?