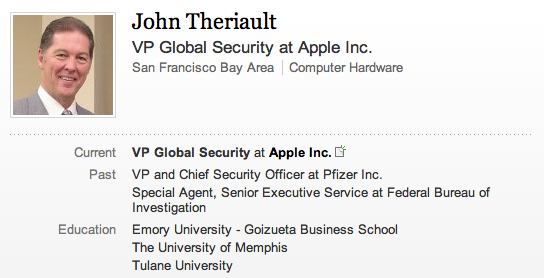 Those paying attention will no doubt remember the story about one unlucky fellow who received a visit from the police, along with a team of security personnel from Apple. Well, it turns out that the fallout from that visit isn’t yet over, with Apple losing its Vice President of Global Security over the matter.

Apple allegedly lost yet another iPhone prototype recently, and using the power of Find My iPhone they decided it was in the possession of a Bernal Heights resident. Apple and the San Francisco Police then rolled up to the guy’s house and asked for it back. Apple’s security team even offered to buy it back, but alas, the man in question didn’t have it…

Since then, there have been claims and counterclaim galore about just what went on, and whether the Apple security team claimed to be members of the police force or not. It’s all a little murky from here on in, but suffice it to say, the case isn’t going away just yet.

Now, Apple’s Vice President of Global Security, Joh Theriault, has retired from Apple, according to 9to5Mac. The report has been confirmed by AllThingsD.

Apple is notoriously secretive when it comes to its prototypes, and losing two in 18 months is a huge embarrassment.