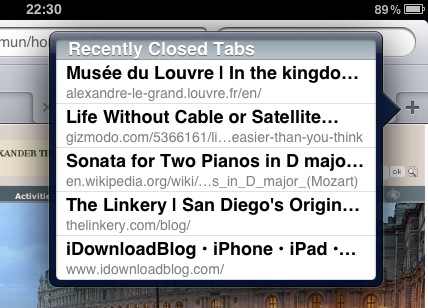 When Apple announced that iOS 5 for the iPad was going to feature proper tabbed browsing, the tablet-using world rejoiced. Safari worked well before, but there is just no substitute for good, old fashioned tabbed browsing.

Now iOS 5 has found its way into millions of hands worldwide, some handy little tips and tricks are starting to pop up for our iPhones, iPads and iPod touches, and one in particular caught our eyes.

Hidden inside Mobile Safari on the iPad, you’ll find a little-known feature that will allow you to re-open recently closed tabs, all without having to go digging through your History…

For something so useful, it is a wonder Apple hasn’t mentioned this more prominently, but we’re already making great use of it at iDB towers, what with out ability to close the wrong tab with alarming regularity.

If you’ve got any similar tips that you think people might be interested in, or that we’ve missed so far, let us know. You might even get your name in lights!