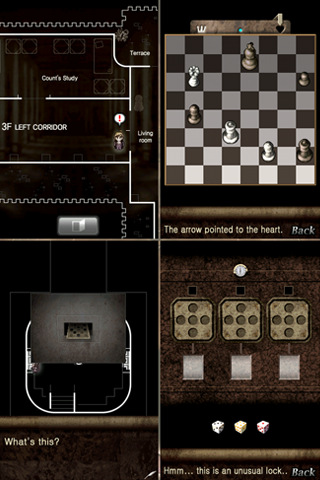 The Secret of Chateau de Moreau from 4:33 Creative Labs promises adventure, intrigue, and mystery with a side of puzzle-solving.

Story driven adventure games have their advantages, but if they’re not well-executed, they can leave gamers dissatisfied. The question isn’t whether or not Secret of Chateau de Moreau can work, it’s whether or not the devs had the talent and skill to make it work…

They’re off to a good start with the backstory. Set in the early 1900’s, Secret of Chateau de Moreau centers around a murder mystery. The Count Moreau died due to poisoning, and the player is given some pretty persuasive motivation to find his killer. As Antoine Moreau, you stand to gain a lot by the Count’s death, because Antoine will inherit everything as the Count’s foster son. Which of course also makes Antoine a prime suspect.

It’s a standard tale, but Secret of Chateau de Moreau goes the extra mile with a host of well-developed characters and enough plot twists to keep the player guessing.

The game is pure adventure genre in that you’ll be spending your time exploring areas, conversing with non-player characters, and solving over 100 creative puzzles to clear your name and bank your inheritance. As a result the controls don’t require too much complexity. They also seem, like the game as a whole, to be relatively bug free.

This is a hard game to put down. If you like puzzles, you’ll love the game’s puzzle-oriented attitude. Locked doors, dusty old libraries — it’s standard fare for a detective story, but there’s a unique flair to the solutions that make conquering Secret of Chateau de Moreau’s puzzles that much more satisfying. The puzzles alone make this game worth its price, but they’re embedded in a completely engrossing story. Secret of Chateau de Moreau is polished in every aspect.

Not only does it have enough teeth to keep you hooked until you beat it, it’s got some fantastic replay value. That’s because Secret of Chateau de Moreau’s outcome isn’t just a win-or-lose prospect. There are forty alternate endings — even “losing” is entertaining because of the plot twists that Antoine sets in motion with his choices throughout the game.

It’s a great story, and it’s also presented well. Secret of Chateau de Moreau is light on audio but it’s off the charts in visual appeal. Gorgeous backgrounds and very professional illustration up the ambiance while detailed character portraits bring the plot to life. The visual appeal of the game will be highest for those who appreciate serious artistry in their games versus 3D flashiness.

For $4.99, The Secret of Chateau de Moreau will blow most PC adventure/mystery titles out of the water. It’s a great deal for a game that offers so much content that’s of such exceptional quality.

Secret of Chateau de Moreau has the makings of a great franchise, assuming its popularity takes off the way it deserves to. It’s a bandwagon worth jumping on now, so check it out in the App Store.