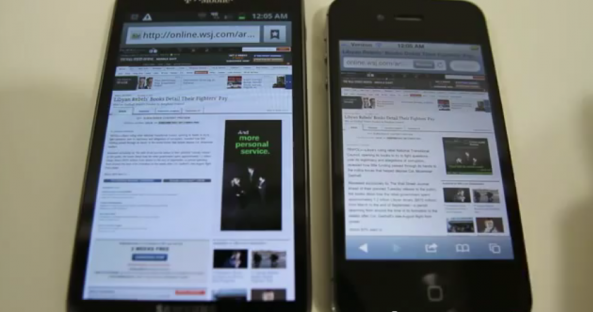 As iPhone 4S units start arriving across the globe this week, expect to see several head-to-head comparison videos with top competitors. Some critics believe that the latest iPhone doesn’t measure up to the competition, so it’s time to find out for sure.

Slashgear is one of the first to the party, as the site has obtained a Verizon-flavored version of Apple’s new handset. And with a T-Mobile-branded Samsung Galaxy S II laying around, they decided to pit the two smartphones against each other in a web test…

After soundly beating its predecessor in a few head-to-head website-loading tests, Slashgear puts the iPhone 4S up against Android’s best — the Galaxy S II. With its dual-core 1.5GHz processor, the new Galaxy S is one of the fastest phones in the business.

Here’s Slashgear on the results:

“One of the fastest processor around currently, the 1.5 GHz Qualcomm in the Galaxy S II performs very well but is just barely by a hair beat by the new A5 dual-core iPhone 4S in most tests. We could argue about this all day, or try other sites but when it really comes down to it iOS is highly efficient — not to mention many websites are designed with iOS in mind.”

The test seems to be on even grounds as the browser cache is cleared from both devices, and they’re both on Wi-Fi. It’s interesting to see that the iPhone 4S outpaces the flagship Android handset, but as Slashgear suggests, it could be iOS-related.

What do you think of the results of the web test?