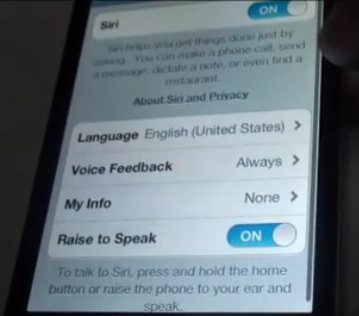 AppVV has managed to get its hands on an iPhone 4S. The video demonstrates Apple’s revolutionary Siri voice technology and early benchmarks for the device.

This video demonstrates the Siri settings in iOS 5, as well as “Raise to Speak” mode…

The BrowserMark score for the iPhone 4S confirms that it is indeed twice as fast as the iPhone 4 in Mobile Safari.

Raise to Speak for Siri has been a previously undocumented feature. A user will be able to hold the iPhone 4S up to his/her face and speak to Siri like a regular phone call. That should help lower the level of awkwardness that will undoubtedly be there when people start talking to robotic voices on their phones all day long.