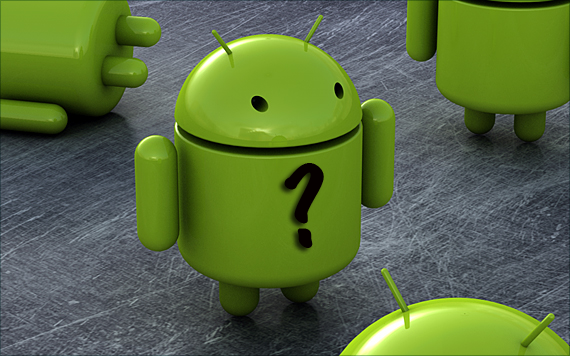 For years, skeptics have viewed Apple enthusiasts in a prejudice light. Dubbed “fan boys,” this herd of sheep would throw down money for any product bearing the fruit-shaped logo, and would defend the company to the death if necessary.

And it seems like the more successful Apple has gotten, the more vocal the cynics have become — especially in the mobile phone space. And I don’t think that there is any group louder than the Android users…

Android owners can be seen on countless iPhone sites across the web, trolling the comment threads and forums with their seemingly baseless discrimination. In fact, I have a few real-world friends that would qualify for that category.

Our debates about which platform is better get pretty intense. You’d think we were arguing about religion or politics. Nope, just mobile devices. That being said, you can imagine the conversation that ensued after Apple unveiled the iPhone 4S.

“Android has had dual-core processors and 8MP cameras for months,” and “my Android has a 4.2″ display, what does yours have again, a 3.5″? Awesome.” And that’s when I realized it, Android users just don’t get it.

Comparing tech specs between an Android handset and an iPhone is pretty sketchy. Processors and megapixels don’t mean anything if they aren’t implemented properly. Take camera quality for example. When the iPhone 4 debuted last summer, there were multiple comparison tests run between its 5MP shooter and the Droid X’s (a popular Android phone at the time) 8MP. The iPhone’s images were found to be on par with, if not better than, the competition’s.

Then there’s screen size. Consider me among those that were disappointed that Apple didn’t add an extra half inch to the iPhone’s display this year. But among the many reasons that Apple chose to keep the screen size at 3.5″ was to protect its ecosystem. Android manufacturers can easily make handsets with various display sizes because the platform is already horrendously fragmented. Android developers are already working against dozens of different form factors and versions of the Android OS, so why not make screens bigger? iPhone developers, however, only have to worry about different iOS versions. Why do you think there’s such a big difference in app quality between the two platforms?

Just because a device’s spec list has bigger numbers in it, doesn’t mean it’s a better product. That’s like saying a 6-cylinder KIA is a better car than a 4-cylinder Audi, it just doesn’t make any sense. It’s all in the execution of the product as a whole. From build material to battery life, it’s all important.

A major feature that Android users like to tout is the ability to play Flash content, an option that Apple has continued to omit from its iOS platform for several reasons. For starters, there’s security. Do a Google Search of the term “Adobe Flash vulnerability” and see how many hits it returns. Don’t worry, I’ll wait. Apple avoids all of those problems you see there by simply keeping Flash out of iOS.

Now let’s talk performance. Have you ever tried using Flash on an Android handset? It’s pretty inconsistent. “Optimized” websites load up in seconds, “non-optimized” pages load very slowly, and some Flash-based websites don’t load at all (like Hulu). And the ones that do load are very limited. Outside of watching videos and simple site navigation, there’s not a lot you can do with Flash on a mobile phone. Have you tried playing a Flash-based game on a touchscreen handset? It’s nearly impossible. As Steve Jobs pointed out, Flash was created during the PC era, for PCs and mice.

So let’s say you overlook the security issues, and the performance problems, and the fact that cell phones tend to run an extra two hours when not using the technology, there’s still another reason not to include Flash. It’s not a necessity. We have third-party applications and HTML5, we don’t need Flash in our everyday lives. Some people might, for a college class website or for their job. I can see some people needing it. And for them, I’d recommend an Android handset. But there’s such a small number of people that require it on a day-to-day basis, that it’s not worth the extra headaches to include it.

Another major point Android owners like to bring up in device debates is the fact that their handsets have removable batteries. Ok. Why? And they’ll say “What do you do when your phone crashes and you need to do a quick reset?” Well I don’t ever have to worry about that, because my iPhone doesn’t crash.

I know what they’re talking about, I’ve owned plenty of Android handsets over the years. Every once in a while, the device would start to act up, and I’d have to pull the battery out to fix it. In fact, during my years as a wireless representative, our first step of troubleshooting Android devices was performing a “battery pull.” And you could see the frustration in the customer’s face, as if to say, “I paid hundreds of dollars for this device, I shouldn’t have to pull my battery once a week or once a day.” And you shouldn’t. This is where I think the iPhone really outshines the competition. Like most of Apple’s products, it just works.

Honestly, I like that there is competition in the mobile space. It’s a win-win for consumers. But if someone asks my opinion on the best smartphone available, I’ll give it to them. And unless that person visits a website frequently that requires Flash, I’d happily recommend the iPhone 4S. No, it doesn’t have a 10MP camera, but I bet its 8MP shooter will still be best in class. And no, it doesn’t have a quad-core processor, but I bet the A5 will never skip a beat. The new iPhone still won’t be Flash compatible, but in four years of owning an iPhone I’ve never missed it. And you likely won’t care that there’s not a removable battery, because you’ll never have a reason to remove it.

From the build quality to the battery life, you’ll be impressed with the iPhone 4S. And it’s all the stuff in between, the little stuff that doesn’t have numbers next to it, or begin with quad-core, that makes Apple’s handset so awesome.

And for some reason, Android users just don’t seem to get that.