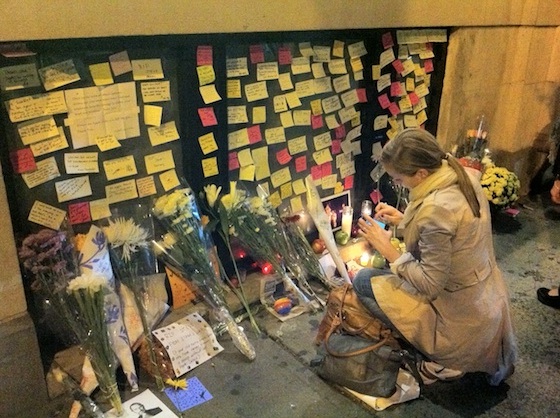 The Wall Street Journal is reporting that Steve Jobs’ funeral is taking place today. The news puts a devastating period at the end of one of the saddest sentences in tech history. Steve Jobs has passed away.

The service will consist of a small “private gathering,” and it doesn’t appear that there will be any kind of public memorial held. But, as a quick look around the world will tell you, the public has already come up with its own way of honoring Steve…

Across the internet, folks have been filling up social networking sites, blogs, and other websites with personal Steve Jobs memorials. And across the globe, people have turned out at Apple Stores by the thousands to pay their respects.

Though there won’t be an official public gathering, it does appear that Apple is planning a special event for its employees to pay tribute to their fallen leader. From the WSJ report:

“In a letter to Apple’s employees on Wednesday, Apple Chief Executive Tim Cook said that the company is “planning a celebration of Steve’s extraordinary life” for staff that will take place soon.”

Steven Paul Jobs passed away on Wednesday, after a long fight against pancreatic cancer. Jobs is survived by his wife Laurene, their three children, and millions of admirers. The man who taught us to think differently will be greatly missed.