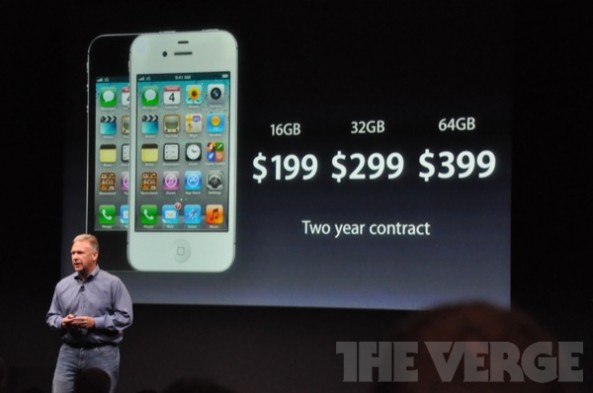 Things are just getting wrapped up at Apple’s iPhone event. After giving the audience a rundown of its new flagship handset, the iPhone 4S, Phil Schiller (Apple’s senior vice president of marketing) started naming off prices.

The new iPhone will remain the same price as previous models. The iPhone 4S starts at $199 for the 16GB, and you’ll put down another $100 for the 32GB. And both models are available (of course) in black and white. But that’s not all…

The rumors are true, Apple unveiled a third iPhone model — the 64GB, but it’ll cost you. The top-of-the-line iPhone 4S costs a cool $399, which is just $100 less than an iPad 2. But the iPhone 4S won’t be the only smartphone in Apple’s lineup.

The Cupertino company is keeping its two previous iPhone models around, offering the 8GB 3GS for free, and an 8GB iPhone 4 for $99. As usual, all pricing above is with a two-year contract with your carrier. Talk about covering all the bases.