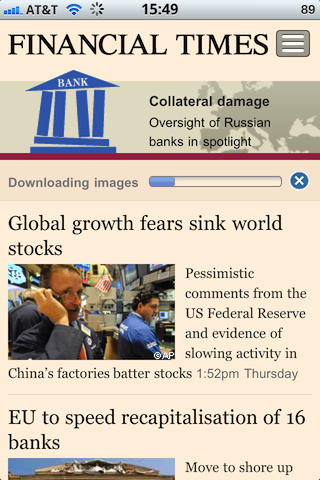 The Financial Times deliberately pulled its own app from the App Store a few months ago to focus on its own HTML 5 web app, through which the company could sell subscription to their digital content without having to play by Apple’s rules.

And this seems to have paid off! Today, the newspaper reports that over 700,000 persons use their web app, drawing more traffic than the native version that was sold through the App Store…

“People who are using the app are spending much more time with the content. They are consuming about three times as many pages through the app as they are through the desktop in an average visit.”

So, there is a life outside the App Store! FT’s success will surely motivate other publishers to follow similar roads.

I just gave the FT web app a quick look, and it’s actually quite good. The web app asks you for permission to use 50MB of database storage on your device to store HTML 5 data, allowing you to download the articles and read them later without the need of an Internet connection.

Maybe they’re onto something.