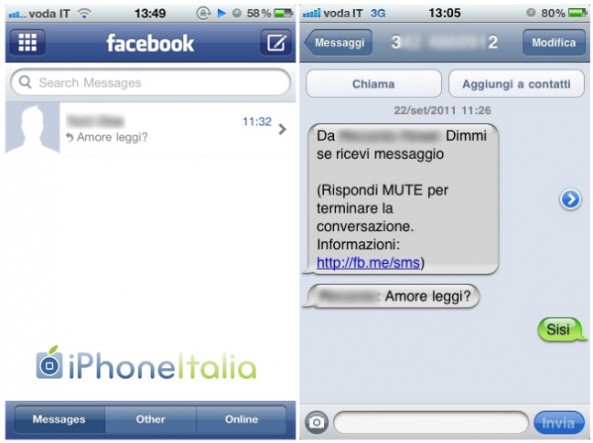 With the internet taking over traditional methods of communication, like actually talking to someone on the phone, VoIP and data services are becoming the way that we consumers choose to communicate.

People love to text, and apps like Facebook Messenger simulate that style of communication via the web. Facebook is allegedly working on a project called “Orca” that will merge SMS and Facebook chat. Once Orca is implemented into Facebook Messenger, users will be able to text anyone in the world for free…

iPhoneItalia is reporting from an “inside source” that Facebook plans to expand its messaging platform by allowing users to text within Facebook chat.

“Orca” was the code name used in the project environments Facebook will soon be integrated into Messenger and Facebook allow users to social networks known to the world of free text messages to any telephone number (for now, we Reportedly, the service seems to be unsupported by the operator H3G) and also to friends, relatives or colleagues who are not registered on Facebook. The number will be used to send its own number of Facebook, not the phone number of the sender.”

If you visit fb.me/sms right now there’s already a page set up for receiving texts.

Facebook is clearly getting ready to implement SMS into its chat system. iPhoneItalia notes that the feature should also be available for Android devices.

With iMessage coming, is it too late for SMS? Do you think it’s smart for Facebook to add SMS support to its chat apps?