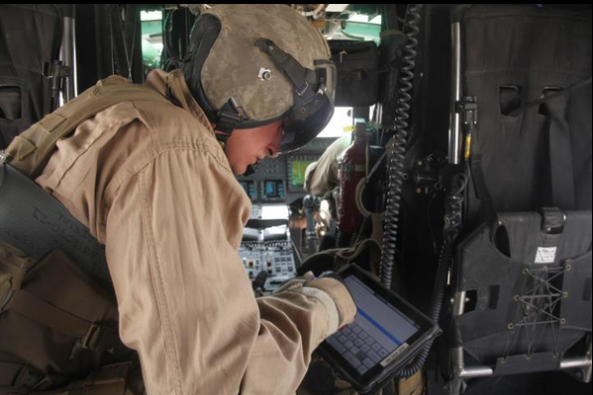 Back in July, we reported that the US military was working on integrating consumer smartphone and tablet technology into soldier’s field gear. Apparently the military’s technology, at least in that regard, was a bit outdated.

Now it looks like the folks pushing for updated technology have recorded their first win, as WIRED is reporting that the 3rd Aircraft Wing of the US Marines have purchased 32 iPads. The tablets are for its Light Attack Helicopter Squadron (HLMA)…

The Marines spent just shy of $20,000 on iPads and accessories. The slates will be used in combat to help better coordinate aerial attacks, and replace a complicated mapping system. The tablets have already proven to help speed up communications:

“The brass was wary when they first heard what Carlson and his fellow pilots were up to at Camp Bastion in Helmand province. They weren’t sure if a commercial product was secure enough to handle in-combat transmission (though only non-classified maps were being stored on the devices). But about a year later, the brass appears to be on-board — at least on a trial basis — and the commanding officer of HMLA-267 told Defense News that iPads have sped up communications by about 15 minutes during close-air missions. Now ground and air can simply confirm they are fingering the same building on their tablet and fire.”

15 minutes may not sound like a lot, but in the heat of battle, that could mean the difference between life and death. If the iPads prove to be as effective in combat as everyone hopes, expect to see more tablets pop up in military uses.

I wonder if Steve Jobs had the military in mind when building the original iPad. Did the thought of the device being used in attack helicopters ever cross his mind? I doubt it. And that’s one of the things that makes the iPad so magical.