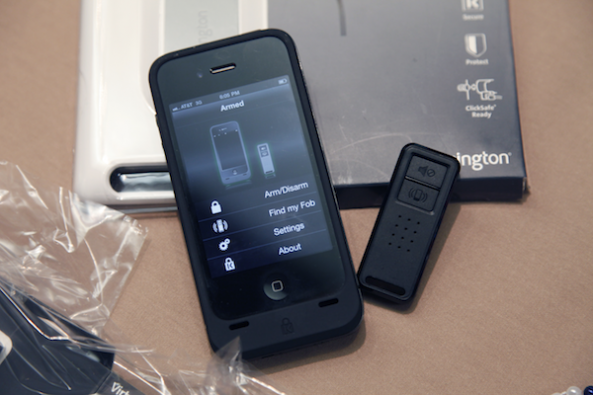 There’s nothing worse than leaving your iPhone somewhere, other than perhaps having it stolen. Kensington agrees with that sentiment, and has launched two new accessories that aim to help us keep our beloved iPhones by our side.

The two releases, while sporting somewhat cumbersome names, act as cases crossed with proximity alarms, letting users know when their iPhone is too far away…

The first accessory goes by the name of the “BungeeAir Power Wireless Security Tether and Battery.” It combines the proximity alarm with a case and battery pack, promising to keep your iPhone juiced for twice as long as usual. The second accessory is exactly the same as its brother, minus the battery pack.

Both devices come bundled with a small fob, which is perfect for attaching to your keys. A free app is then downloaded from the App Store, which establishes a connection to that fob, and the alarm sounds when the distance between the two meets a threshold that is set by the user.

As additional security, the device will be automatically locked, and a password is required to gain access again. Perfect if you leave your phone in a cab, or heaven forbid, have it stolen. For the secret spy iDB readers out there, well, you know the practicality of what Kensington has to offer.

The battery-equipped version runs at $100 and is exclusive to Amazon, while the base model cost $80 and is up for grabs via Kensington’s web store.

If you decide to pick either one of these devices up, remember to let us know how it works for you in the comments!