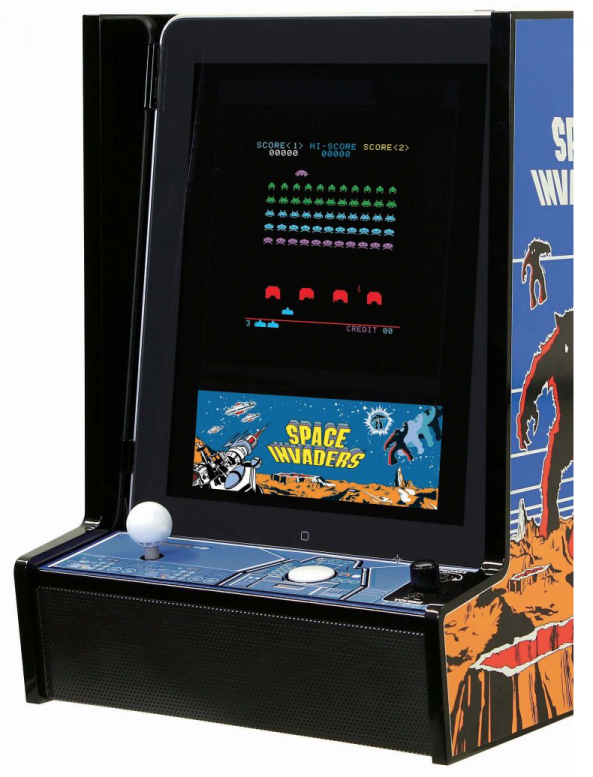 First you had Atari, and now another old-school gaming company is hoping to ride the waves of interest that the original iCade has mustered up.

The upcoming iNVADERCADE is a replica of the original 1978 Space Invaders arcade cabinet. It’s designed to use the iPad as the screen and processing power behind an iOS version of Space Invaders HD.

While it’s obviously inspired by the aforementioned iCade, there are some noticeable differences. First of all, there’s only one input button on the face of the cabinet, which obviously severely limits the amount of games you can play.

Secondly, it only appears to work in vertical mode, which again, limits the number of games that the unit will be compatible with.

At this point, it’s still unclear whether or not the device uses Bluetooth to connect to the iPad, or if it uses the 30-pin dock connector, outside of feeding it power. There’s no mention of Bluetooth anywhere, so I’m suspecting it’s taking the same route that the previously mentioned Atari device is.

For those of you who prefer to take down those pesky invaders of space in silence, there’s a handy headphone jack with a volume toggle located to the right of the sole action button.

Oh, and one more big difference, the price. At ￥15,800 — just north of $200 USD — the device is more than two times the amount of the better supported, more flexible, and certainly more capable iCade.

In other words, only the most diehard Space Invaders fans need apply.

We sent a kite out to Taito to see if the device had a chance of hitting US shores in the near future, but we haven’t heard any word. I’m going to go out on the limb here and say there’s absolutely no chance of that happening. What do you think?