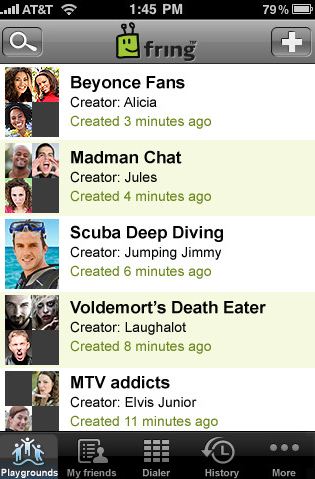 You know when something seems like a really good idea, but in reality, it’s going to be hijacked by the less morally upstanding? Fring’s latest video chat feature feels just like that, and we’re sure it’s going to turn out badly.

Fring has been around for some time now, offering cross-platform chat and video chat via their own apps. Their latest feature is an interesting one, and it’s clear that they are trying to get more people to use their smartphones as video communicators.

Fring calls it “Playgrounds,” and the idea is a simple one: ‘rooms’ based on categories, such as, fans of a TV show, in which people can join and video chat. Like we say, it seems like a good idea. But it probably isn’t…

We’re willing to guess that it’s only a matter of time – assuming it hasn’t already happened, that is – until we’re hearing about a Chatroulette-type situation going on. You know the kind of thing we’re talking about, and Playgrounds seem ripe for the picking.

Once you get past the.. er.. genetalia factor, Fring might actually have something here, and the big advantage over Skype is the fact that it’s absolutely free.

“Playground Video chat empowers users to video & voice their opinions about things that matter to them. We let users do more than simply ‘follow’ their interests. Now they can actively engage with others via video chat, instead of waiting for character-constrained updates,” says Avi Shechter, CEO and Co-founder of fring.”

We’ve not tried Fring’s Playgrounds ourselves yet, and we’d love to hear your experiences if you’re been brave enough to give it a shot. How did it work, and what was the conversation like?