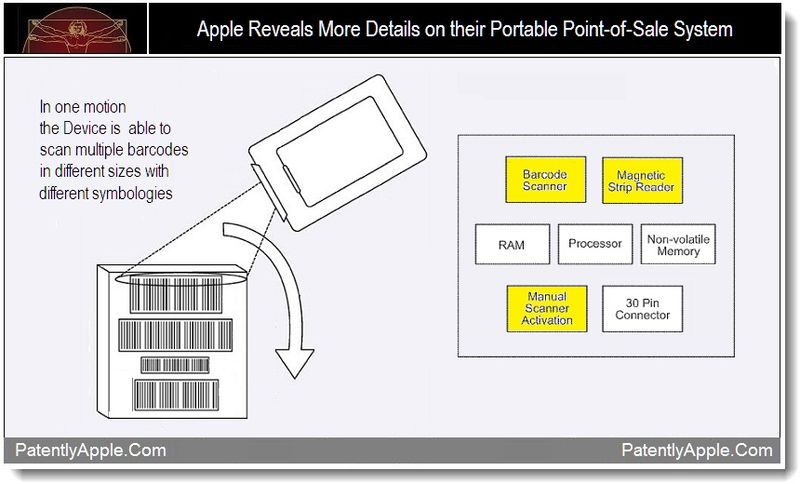 Apple may be widely known for its consumer and prosumer products, with Macs, iPhones and iPads providing its core business, but a new patent details what could be a move into the world of business and retail, with a new Point-of-Sale system in the pipeline.

While we doubt it will feature the tell-tale glowing Apple logo, the glorified barcode scanner does feature one Apple trait – it fixes a problem than many store workers don’t know they have…

Currently, when selling electronic products in particular, store clerks must not only scan a product’s barcode, but also other codes that tell a computer of the item’s IMEI and ICCID numbers. This collection of barcodes, writes Patently Apple, can cause confusion amongst clerks and inevitably results in human errors, costing time and sales.

While we think the confusion created by scanning three barcodes is perhaps being overstated a little, the system detailed in the patent does have the ability to distinguish between the three codes and send them to the POS software in the right oder, again reducing the possibility of input error.

“After the scanning operation, the handheld communication device could identify the code type associated with the barcodes from the received data. For example, in the purchase of a mobile telephone (one type of handheld communication device), a product package often includes a UPC code, IMEI code, ICC ID code and a serial number, each encoded into a barcode. The barcode scanner could scan and decode each of these barcodes and the handheld communication device could identify each code. In some embodiments, this identification is done by a pattern matching technique. In some embodiments, this identification could match each code to a recognized code according to the number of alphanumerical characters expected in the recognized code.”

This feels more like something Apple wants for selling iPhones and iPads rather than something it intends to sell to other retailers, but it isn’t beyond the realms of reason for Apple to potentially look at widening its markets. Could we see Apple branded POS systems at our local Best Buy?