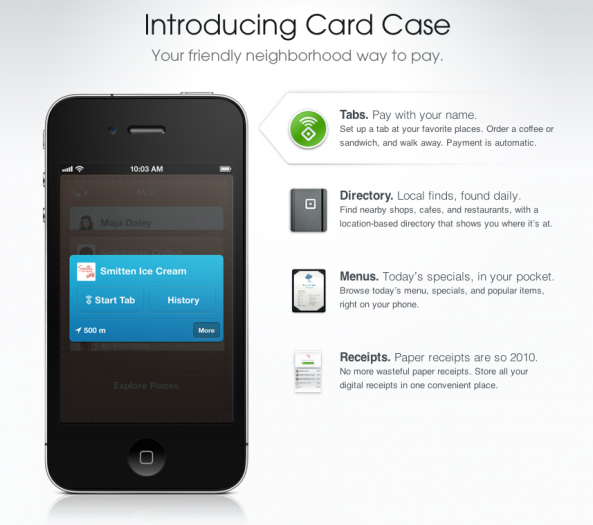 We’ve told you about the revolutionary mobile payment system for iOS, called Square. As a creation by  Twitter’s co-founder, Jack Dorsey, Square aimed at bringing mobile payments to the iPhone and iPad in a way that’s never been done before.

As was unveiled yesterday, Square has introduced the next step in its path towards dominance of the mobile payment industry, called the Card Case. Instead of paying with a physical credit card or cash, why not just use an app and your own name?

“Here’s how it works: you order a coffee at a participating shop, for example, and when you swipe your credit card, the receipt is emailed to you. Leave your card on file with Square, and next time you visit the coffee shop you can browse the menu and pay with the company’s new app by pressing a button. They call it opening a tab, a high-tech homage to the pad-and-paper accounting that barkeeps, druggists and general store clerks were accustomed to many generations ago.”

Square has been around for awhile, and the startup has already shipped 500,00 of their Square card readers. As long as we’re talking numbers, the company also processed 1 million transactions in May, and currently completes a staggering $3 million in transactions a day. 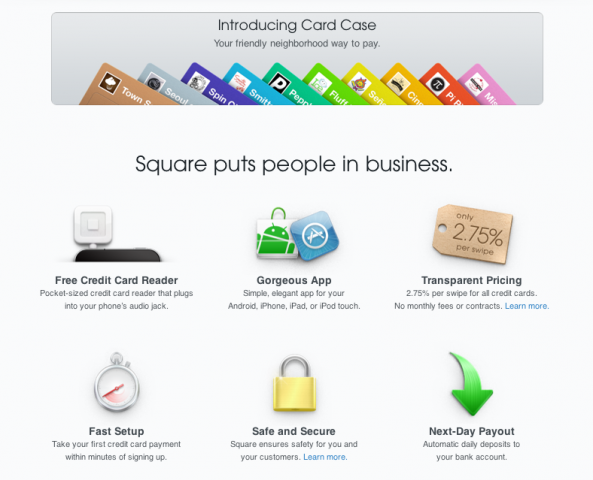 Keep in mind that Square is totally mobile-based. It’s free iPhone and iPad app is the company’s bread and butter, and the whole goal of Square is to provide smaller merchants with the ability to process digital transactions easily on an iPhone/iPad/Android device.

The idea of a virtual card case for merchants and transactions on the iPhone is very appealing. Imagine walking into your local coffee shop, and instead of swiping your card or even pulling out your iPhone, you pay for your drink by simply stating your name. The person at the register can then add the fee to your Square tab after you’ve authorized that location in the Card Case app. 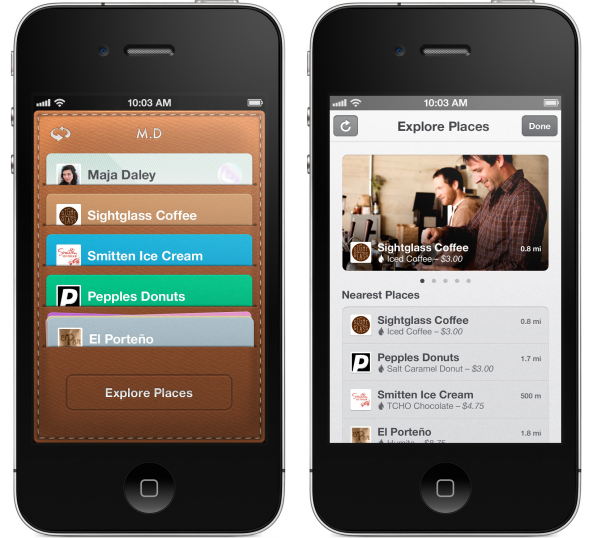 You’re obviously not going to want to use Card Case in many instances, but the concept sounds perfect for a place you visit often. Square hasn’t shared much info about expansion, but Card Case is now available in the San Francisco Bay Area, New York, Los Angeles, Washington DC, and St. Louis.

Here’s an interview with Square’s CEO by Fortune about the Card Case and what it means for mobile payments:

The next iPhone has been rumored to have NFC technology for processing mobile payments, but this new venture by Square makes the proposition of NFC seem unlikely from Apple this year. Square already looks like it was designed by Apple, and the service works great. I’d be all for a buyout. Apple and Square have already partnered to sell the Square readers in Apple retail stores.

In the meantime, you can download Square’s free app and get started with processing mobile payments.

Who’s ready for Square on every iPhone this fall? Sounds like it would be a very interesting proposition for both companies.