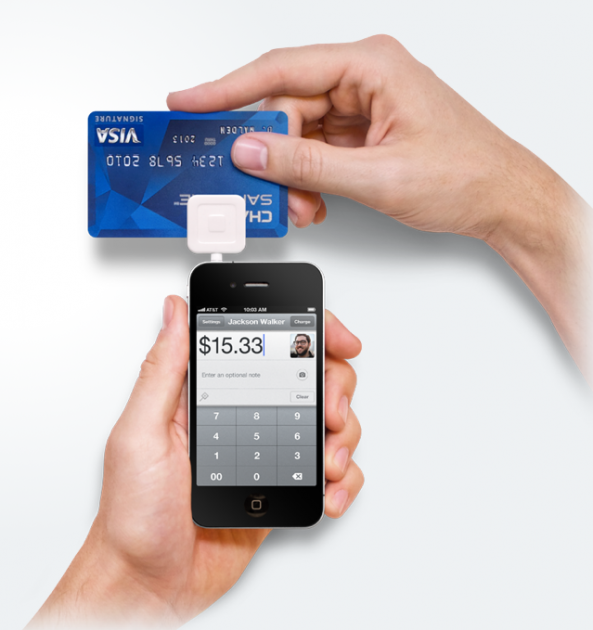 The mobile payment industry has been rapidly developing. Companies like Square are starting to offer transaction services for payments through smartphones like the iPhone.

Square allows you to receive credit card transactions on the iPhone through their app and plug-in reader device. Apple is now selling Square readers in its online and retail stores. An interesting move, considering the iPhone 5 could have built-in NFC technology…

“Apple has shown some love for Square lately, so it’s not entirely surprising that the payments startup has forged a deeper relationship with the Cupertino-based company. Most recently, Apple CEO Steve Jobs showcased Square’s technology at the debut of Apple’s iPad 2. But to be featured on Apple’s online store and in its brick and mortar operations is a big deal.

The device will be only payments product featured in the store, and while display location may vary by store, we hear that Square will be included in the store area where main consumer-oriented accessories are displayed. Apple and Square will also be partnering to host educational seminars at the stores, where consumers can learn how to use the device.”

The device retails for only $9.95 and come in white and black. Users will also get a $10 “Square credit” for their account when they buy the device. The Square reader plugs into the iPhone’s headphone jack and works together with the company’s free iPhone app. To get a more comprehensive understanding of Square, check this out.

Although a Square account is free, the company will take 2.75% off each transaction. The whole Square model is really geared towards small business owners our traveling vendors that need an easy and portable means for accepting credit card payments.

TechCrunch speculates on the financial reasons behind Square’s sudden allegiance with Apple,

“Clearly Square is taking a bit of a bath on the device sales here. Apple is probably taking some sort of cut from the transaction, and Square is giving merchants a $10 credit, so effectively, the company isn’t really making any money. In fact, it appears that Square could be losing money on this. But an endorsement and placement from Apple could boost sales and usage for the payments device so perhaps all will even out in the end. Also, Apple managing distribution and shipping of Square devices means that the startup will be able to give users access to quicker and more efficient delivery operations.”

Apple currently doesn’t use Square for handling purchases in its retail stores, but maybe the two companies will join forces in that area.

I sense something like a slow buyout taking place. Apple has shown obvious interest in Square, and Square has what it takes to bring mobile payments to every iPhone. It’s unclear as to how such a move would play into the NFC rumors we keep hearing about, but Apple definitely has something up its sleeve.

Will you be giving Square a try on the iPhone? What do you think the future of mobile payment technology looks like?