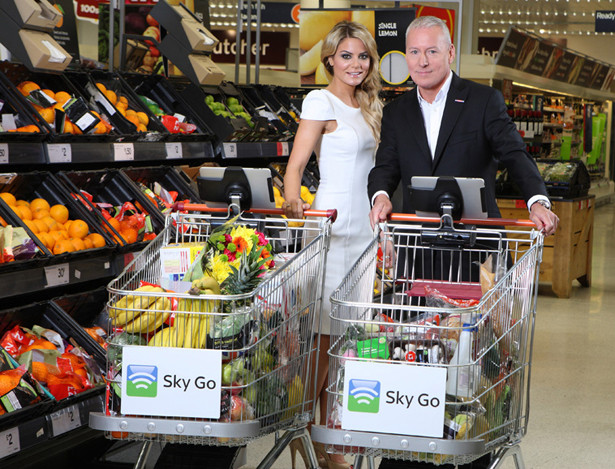 Sainsbury’s, one of the UK’s largest supermarket chains, is getting ready to bring a rather unique shopping trolley to some of its stores, according to Pocket-Lint.

The fancy new way of carting your goods around will sport an iPad holder, speakers, and a fancy new ‘collision detection system’ when it appears in stores. The new cart and is part of a deal with the satellite television company, Sky…

Sky recently launched a massive mobile streaming initiative, which involved the launch of a universal iOS app going by the name of Sky Go. If that rings a tiny bell, it’s because we told you all about it not that long ago

The idea is a simple one, if a little odd. Both Sky and Sainsbury’s seem to think that we’ll go shopping more often if we can watch out football whilst we’re doing it. And by football, I mean proper football, thank you very much. To that end, they’ve attached an iPad holder to their trolleys, as well as including in-build speakers and a system that will notify the trolley operator before an impact occurs. That means no knocking over tins of beans while you’re watching TV.

Perhaps the most interesting part of the trolley is its battery, which according to the people behind it, is capable of charging your iPad while you shop. That has to be a plus, even if you’re not going to watch anything. We can’t see why you couldn’t charge your iPhone instead, either.

“Where the trolley gets really exciting is with the eco-friendly battery-charging system that can, in theory, recharge your iPad. We like the idea of quickly nipping into Sainsbury’s, pretending to shop, only to get a little bit of extra juice into our tablet. There is also a tilting display for the iPad that allows you to watch the tablet from any angle.”

Whether this has a chance of taking off is anybody’s guess, and we’re erring on the side of caution. But an A+ does have to be awarded for effort.

We don’t expect to see too many people taking advantage of these new trollies, unfortunately. Would you?