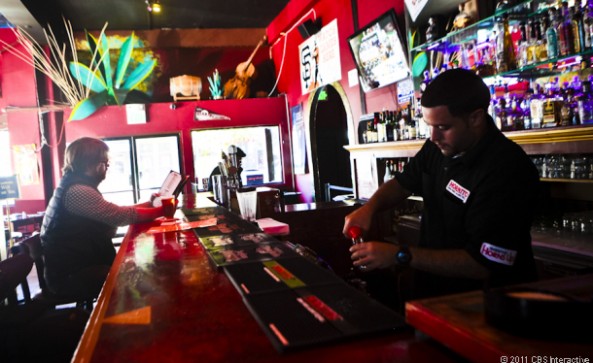 The infamous Gizmodo/iPhone 4 debacle grabbed all kinds of headlines last year. No one believed that a company as secretive as Apple could let an iPhone prototype device loose in the wild months before it was slated to be announced.

Believe it or not, it’s happened again. CNET is reporting that they have learned that another unreleased iPhone has been lost in a — wait for it — bar in San Francisco…

As most of you remember, the iPhone 4 that was lost in a bar last year was recovered by Brian Hogan. The youngster later went on to sell the device to Gizmodo for a reported $5,000. That doesn’t seem to be the case this time.

As CNET tells it, this year’s lost iPhone was taken from the bar of a Mexican restaurant and is believed to have been sold on Craigslist for $200. The device originally went missing in late July, and Apple security has been trying to hunt it down ever since.

After the phone went missing in San Francisco’s Cava 22, a self-describe “tequila lounge,” Apple was able to trace the device to a house in San Francisco’s Bernal Heights neighborhood. But after a thorough search of the home, the police came up empty.

It’s still unclear what version of iOS the device was running and what it looks like. So yeah, basically all the good stuff is unknown at the moment. But it’s still interesting that we are seeing a repeat of last year’s disaster, almost play for play.

Up until this point, Apple has been guarding its next smartphone extremely well. Even with all of the rumors, leaked components, and blurry spy shots, the tech world still seems unaware, for the most part, of what Apple has planned for this Fall.

CNET isn’t your typical “gadget blog,” and the publication has a long history of accurate sources inside Apple and around the industry. They’ve correctly predicted several Apple services, including iTunes Match. Here’s hoping that someone gets their hands on the device and takes some non-blurry photos.