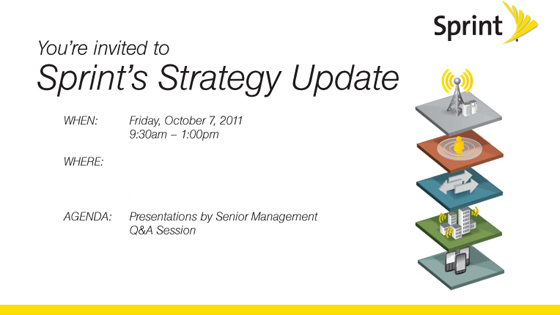 It seems a day can’t go by without a new iPhone 5 rumor, and today has had its fair share already. The latest rumor to throw on the metaphorical fire revolves around US cell phone carrier Sprint and an event it plans to hold in October.

The event, which will take place on October 7th, is being called a ‘strategy update‘ by the execs at Sprint. It’s supposedly aimed at giving the team a chance to speak to the press, as well as a question and answer session. But is that all? Maybe. Maybe not…

The Verge suggests that the whole event is merely to give Sprint a vehicle for outlining their plans for 4G technology, something they have been working on for quite some time. The same site isn’t willing to rule out the possibility of an iPhone announcement, though they aren’t willing to say yes, either.

“Or heck, maybe it’s just that the iPhone is coming to Sprint. We’d be surprised if this was the event to announce it, but the past month of tech news has been crazy enough that anything could happen.”

All signs point to an October release for whatever iPhone Apple decides to bestow upon us, so the dates match in that regard. But there’s a very slim chance that Apple will give Sprint the reigns for an iPhone announcement.

When the next iPhone is unveiled, the boys from Cupertino will want to wheel out Tim Cook, probably even Scott Forstall, and a few dozen iOS developers. Yes, Verizon did get their time in the spotlight for its iPhone 4 launch, but a nigh-on twelve month old hardware release is a completely different kettle of fish to what we’re expecting Apple to pull out of the bag in the coming weeks.

Of course, that doesn’t mean Sprint won’t be getting the iPhone. But we wouldn’t pin our hopes on anything exciting coming out of their October 7th event.