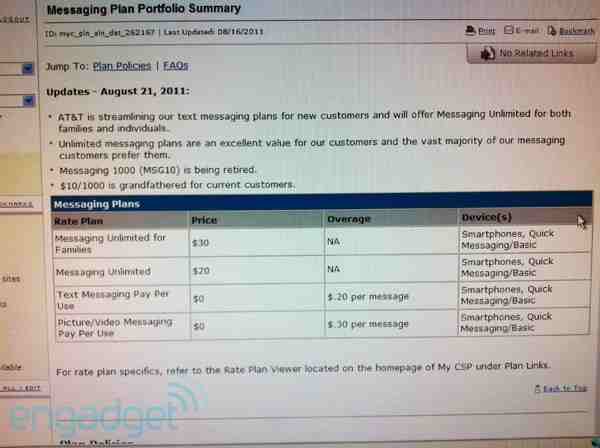 An interesting move is on the cards from U.S. carrier, AT&T, according to Engadget and a subsequent AT&T press release.

The blog claims that ‘multiple sources’ point to AT&T dropping its 1,000 message $10 bundle, which would leave just two options for new customers – stump up $20 for the still loving unlimited SMS plan, or pay per message….

The move comes as many, including us here at iDB, believe that the days of SMS are very much numbered. With competition for messaging bragging rights coming from just about every angle, SMS and its huge costs, considering the amount of data transmitted, could soon be a thing of the past.

Apple’s iMessage will arrive in the public release of iOS 5, offering a free alternative to SMS between those using Apple’s portable devices, and Facebook has also started to make inroads with its Facebook Messenger app. Other third party solutions have been doing the rounds for quite a while now, and if you throw instant messaging protocols like AIM and Gtalk into the mix, then you have to wonder why we keep SMS around.

Now we do know that not everyone uses smartphones, and thus don’t have access to apps like WhatsApp, but that will surely change over the coming years. Will SMS go away tomorrow? Probably not, but can we really see it being around in 10 years, complete with 160 character limit?

“We regularly evaluate our offers and are making some adjustments to our messaging lineup.