New figures released by Gartner show sales for smartphone handsets during the second quarter of 2011, and two mobile giants are apparently beginning to take over the market.

Apple’s iOS and Google’s Android platforms now account for around 62% of the smartphone market, according to the report, which represents a doubling of the percentage during the same period in 2010… 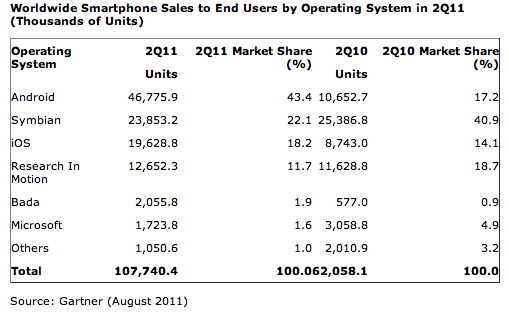 Gartner reports that Android is currently the number one smartphone operating system across the globe, with 43% of the market during Q2-2011. Apple’s iOS sits third with 18%, and Nokia’s outgoing Symbian sits nicely in-between, sporting a healthy 22% share.

With figures like that, you have to wonder why Nokia is in so much trouble, until you remember that Symbian sales are also made up of the relatively dumb phones sold in developing countries.

The stats do corroborate what we’ve all thought for some time, and that’s the fact that Apple and Google are slowly but surely sewing up the smartphone market, with the space being neatly divided up between the two behemoths.

Is there room for another powerhouse to muscle in on the pair’s territory?

Microsoft’s Windows Phone 7 currently accounts for just 1.6% of the worldwide smartphone market, and the Redmond outfit will no doubt be hoping that their deal with the struggling Nokia will help to give that figure a healthy boost.