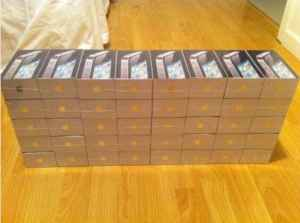 With so many companies as well as individuals now beginning to count the cost of the recent riots across the UK, it’s impossible to overlook the one product that seemed to be most popular amongst those looting — smartphones.

Apple’s iPhone was one of those to see huge numbers begin appearing on Cragislist and other online marketplaces. Macworld UK went to the major carriers and asked just what would become of the stolen handsets.

As Macworld points out, once stores have checked their inventory and discovered which handsets are missing, they will be able to inform carriers to add their IMEI numbers to an Equipment Identity Register. This will stop any of that network’s SIM cards working in the handset within 24 hours.

From here, the IMEI will be added to the Central Equipment Identity Register which stops any network’s SIM card from working in a stolen handset, with a 48 hour window.

Now, the only way to use such a phone would be to ship them abroad, which we somehow doubt your average knucklehead looter will be willing to do.

There’s another consideration here, too. If a SIM card that is attached to a contract is used in a stolen phone, the user then runs the risk of giving authorities a heads-up as to who they are and where they live.

Wouldn’t that be a shame.