Although Apple took a couple of years to implement system-wide multitasking in iOS, it seems to do the trick. It’s easy to access the multitasking bar from any application, and for the most part, apps running in the background don’t slow you up.

Note that I said for the most part. It seems like once you have 10 or more apps running, your iPhone starts to feel a bit sluggish. And to close them all one by one can be a tedious task. So why not download a jailbreak utility that’ll do it for you in one step?

KillBackground is a simple utility that allows you to close out all background running applications in a single tap. The tweak installs itself into your multitasking bar, so there’s no need to mess with 3rd party applications.

I currently use RemoveBG, with the SBSettings toggle, and it works pretty well for me. However, the convenience of having the kill button in the multitasking bar is enticing enough to make me consider switching.

My one gripe about this utility has to do with the cosmetics. It consists of 2 large skull-and-crossbone buttons that sit on either side of the app switcher. I don’t happen to have a pirate theme, so the 2 buttons stick out like a sore thumb. 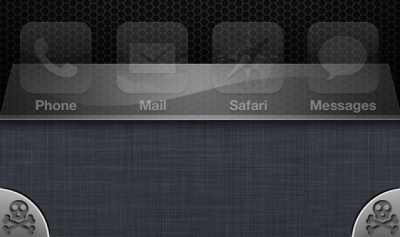 If you can get past the skulls, the tweak works great. It’s a nice alternative to some of the other offerings. If you want to download KillBackground, it’s available in Cydia for free.

Have you tried KillBackground? What do you think?

UPDATE: Since its release, KillBackground has received a few updates. Included changes are now only one low profile button and added settings options. In the Settings app, you now have the choice of which side the button goes on, turn it off unless the icons are wiggling, and prevent it from closing apps that are playing music. So head on into Cydia and download this new and improved free tweak.

If you don’t like the little skull and crossbones icon simply do the following:

What do you guys think? Is this app better? Let us know your thoughts below!