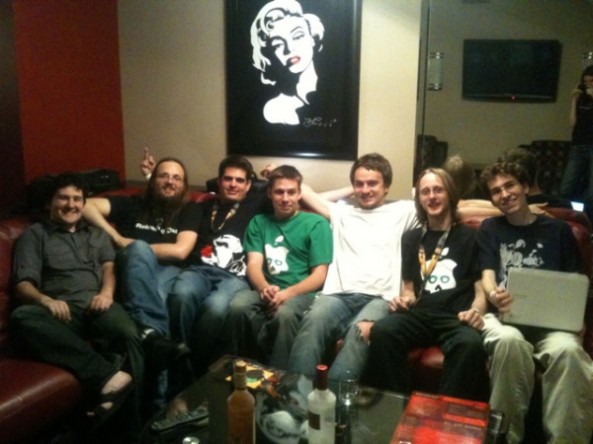 Justin Williams tweeted the above picture from p0sixninja’s hotel room last night. The group was enjoying a little R&R after a heavy day of hacking at this year’s Defcon convention. The annual event highlights new exploits and popular topics in the security community.

If you’ve been jailbreaking for a while, chances are you’ll recognize a few people in the picture above. Instantly identifiable are Saurik, the mastermind behind Cydia, and the original iPhone hacker GeoHot…

Then there’s Chronic Dev team member p0sixninja, aka Joshua Hill, and Justin “Jaywalker” Williams sporting the GreenPois0n t-shirts. And if that’s not enough star power, nitoTV (known for his work on the Apple TV) is in there too.

It’s crazy to think about the effects that these guys have had on the jailbreak scene. If nothing else, this epic photograph makes you stand back and think, “Damn, there sure are a lot of rock stars in that room. I wonder what they’re talking about.”