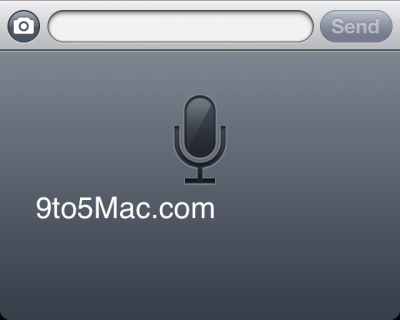 In the weeks building up to this year’s WWDC, there was a lot of speculation that Apple and Nuance were planning a major partnership to bring system-wide voice-to-text to iOS 5. The 2 companies were expected to make a big announcement at the Summer event.

But the developer’s conference came and went with no mention of the new feature. Then we started to see code trickle in. Found deep inside Apple’s new firmware, the evidence suggested that the company was still working on bringing voice-to-text to its customers this Fall.

Now we don’t just have bits of code, we have actual proof. Hit the jump for the full screenshot…

9to5Mac just got sent over these exclusive screenshots of the new feature in action. As you can see, the new speech-to-text option can be activated by tapping the new microphone key, situated just to the left of the spacebar on the iOS keyboard.

Once the key is pressed, a grey overlay (pictured at the top) will appear as long as you are talking. When you’ve finished, the overlay will vanish and your spoken words will appear in the text field. I know, pretty standard stuff. 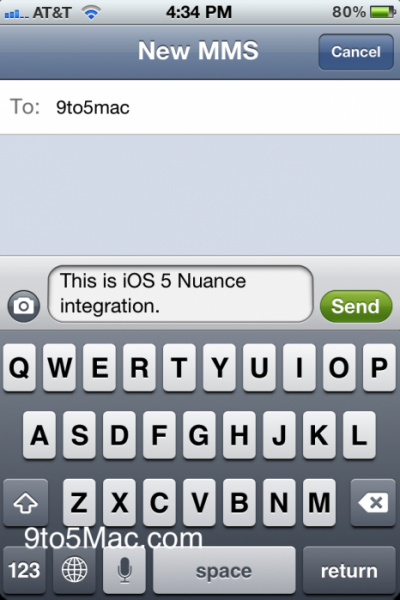 Another tidbit from the source was that this functionality is only planned for Apple’s smaller devices, such as the iPhone and iPod Touch. But iPad support is still technically possible.

Although 9to5Mac claims they received these screen grabs from a reliable tipster, they do warn that iOS 5 is still in beta testing and the feature is subject to change. The real question now is this: How well is this thing going to work?