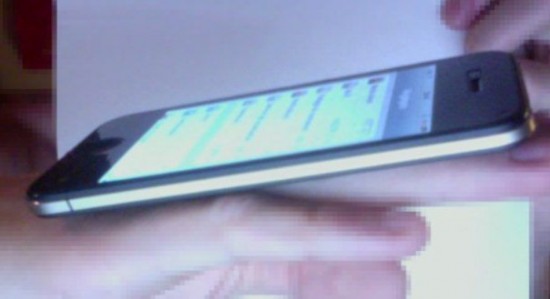 You know Apple is about to launch a new product when spy photos of the device start surfacing in bunches. Last week 9to5Mac posted a blurry snapshot of a purposed iPhone 5 in the wild, but most folks wrote it off as a 3GS.

Today, MacRumors posted another foggy photo of what could be Apple’s next smartphone. The image depicts a device that seems to match up with some of the rumors we’ve heard regarding the iPhone 5’s design, and is believed to have been taken in the office of a French carrier…

A lot of the information we’ve been hearing about the next iPhone suggests that it will look very similar to its predecessor. I’m not just talking one or two rumors, but several of them. This particular device looks like the iPhone 4, but with a  slimmer profile and a seemingly larger display.

The photo was originally posted in a MacRumors iPhone forum with the following text:

“iPhone 5 : the first picture !!! Picture taken yesterday in the office of a French operator. Believe it or not… Cheers”

The fact that it’s in the hands of a wireless provider would actually make sense, considering all of the recent reports we’ve been hearing that Apple has sent iPhone 5 units out to carriers for testing.

It’s important to note thought that this is the first time that this member has posted to the site, so there’s no credibility. Also, these “spy shots” have a tendency to be photoshopped and fake, but we’d be remiss not to post one. Here’s hoping that this one isn’t too far off from the real thing.