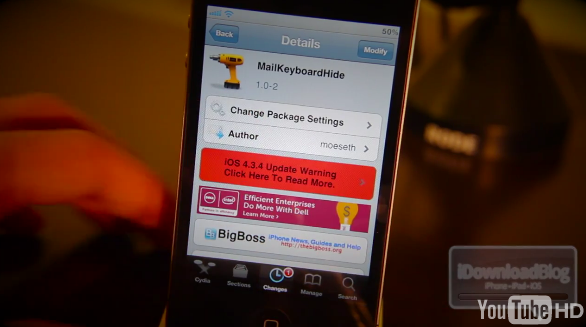 Just last month we told you about SMSHideKeyboard, a jailbreak tweak that brought iOS 5-like SMS keyboard hiding to the jailbreak scene.

Today we have a similar tweak, but one that has a trick up its sleeve. Going by the name of MailKeyboardHide, this slight variation of SMSHideKeyboard offers the ability to hide the iPhone’s keyboard during the composition of emails.

And it also does more than that…

Despite the rather vague name, MailKeyboardHide actually allows the iOS software keyboard to be removed from the screen in any app. All you need is the flick of a finger.

Here’s the scenario: you’re typing out a long email, but you want to have a quick proof read, just to iron out any kinks. Currently, you’re stuck with the large on-screen keyboard filling the display, leaving barely enough room for you to see your content. You want rid of that keyboard, and unless you install MailKeyboardHide, you can’t.

Once you’ve done the wise thing and downloaded the tweak from Cydia (it’s free, by the way), all that is needed is a flick up or down with your finger, and the keyboard goes away. Tapping the input area will have the keyboard sliding back up. Simple.

Let’s hope Apple includes this in iOS 5, seeing as they already brought a similar functionality to the Messages app.