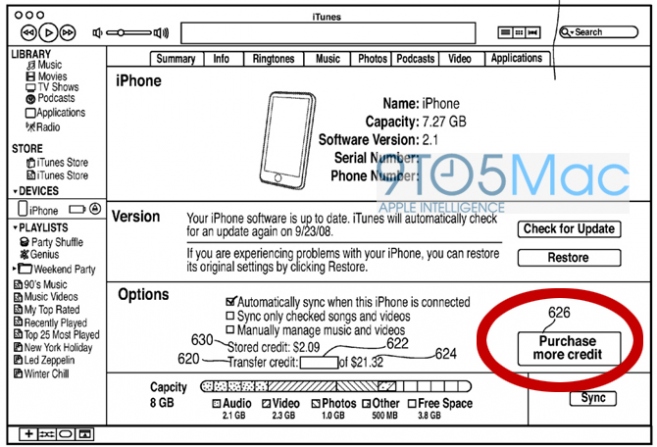 We’ve been hearing a lot of rumors lately about the possibility of Apple unveiling a 3G-capable iPod Touch this Fall. The move would actually make a lot of sense, considering it would enable the devices to download more applications and other iTunes media while out and about.

Apparently, Apple has been working on a software solution to the iPod Touch’s Wi-Fi-only dilemma. 9to5Mac uncovered an interesting patent application in which engineers from Cupertino company describe a new method for making offline purchases…

The filing details an approach involving iTunes credits and cached media content. Users would be able to obtain iTunes credits (think iTunes gift cards) and use them to purchase media content while offline. A credits system would remove the layer of complicated encryption needed for credit card transactions.

“One or more media items that are not part of a user’s media library can be stored on an electronic device. When a user later wishes to play back one of the media items, but the device cannot connect to a communications network to provide payment information for purchasing the media items, the electronic device can use pre-paid credits that were purchased and stored by the device when a communications network was available to complete the purchased.”

The other half the equation is cached media content. The patent explains that a user’s electronic device would be able to store multiple media items that aren’t part of the user’s library (think Spotify). The encrypted files would be unlockable by purchasing them with the aforementioned credits.

How would it chose which files to cache? You know the Genius feature used in iTunes and the iOS iPod application? It collects information from a user’s song library and then recommends other tracks based on the data. The technology could be used to ensure that the cached content matches a user’s tastes.

The idea is actually rather genius. The first scenario that comes to my mind is a businessman loading up his iTunes account with credits before leaving for the airport. The offline purchasing system would come in handy during long flights where Wi-Fi isn’t offered.

What do you think of Apple’s offline purchasing idea?