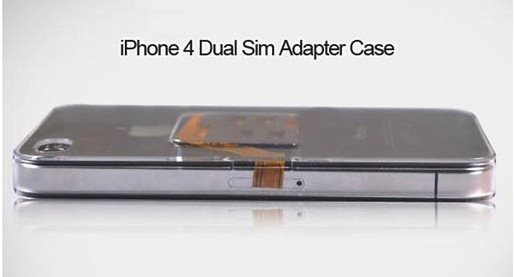 You might recall that earlier this year, there was a rumor going around that the next iPhone would feature dual SIM card slots. This would allow users to connect multiple phone lines to the device, eliminating the need to carry multiple phones.

While we haven’t heard any follow-up information suggesting Apple’s next smartphone will sport the dual SIM option, we have seen several accessory makers offer the feature for the current line of iPhones. The latest product we’ve seen surface, just like the Rebel 2Phone, adds a second SIM tray to your iPhone 4 via a removable case…

Before accessories like this came along, a majority of the dual-SIM adapters available were unsightly dongles that hung from your iPhone’s SIM slot. But with this new product from VaVeliero, users can add a second phone line by slipping on this stylish case.

VaVeliero’s Dual SIM Cover connects to your iPhone 4 through its SIM card slot. The external SIM tray is masked perfectly by a slender iPhone case, which is an improvement over the Rebel 2Phone’s bulky design. Here’s a walk through video of the Cover, by the folks over at iPhoneItalia.

The bad news is that VavEliero’s accessory doesn’t allow both SIM cards to be active at the same time, but users can manually switch between phone numbers via a few screen taps. Phone numbers can also be set on timers, so that when you get off of work at 5:00PM, the phone line switches from work to personal.

VaVeliero operates in Europe, but as 9to5Mac points out, the device should work here in the states on AT&T. The device is compatible with GSM, GPRS and EDGE technologies. The company notes that it’s been tested with 4.3 firmwares, but no specific baseband is mentioned.

Although the case doesn’t allow you to keep both lines active at once, the timer-based phone line switching is a compelling feature. Especially for folks who stick to a similar schedule every day. The fact that VaVeliero’s Dual SIM Cover only costs around $70 bucks might also entice you to pick it over the competition.

What do you think? Useful?